Eastern Conference postseason action will resume on Monday night with Bucks-Nets Game 2 set to kick off TNT’s nationally televised double-header at the Barclays Center in Brooklyn.

So, VI is getting you ready with a variety of betting resources to help handicap both pivotal matchups.

After being favored by four points ahead of Game 1 this past Saturday, Brooklyn enters the second matchup of this series as a 1.5-point favorite over the visiting Bucks – which has slightly moved in Milwaukee’s direction due to James Harden being listed as unavailable for Game 2.

The total for Monday’s contest has fallen down the ladder six points to OU 233.5 – which is indicative of Saturday night’s series opener containing just 222 points scored in it (U 239.5). 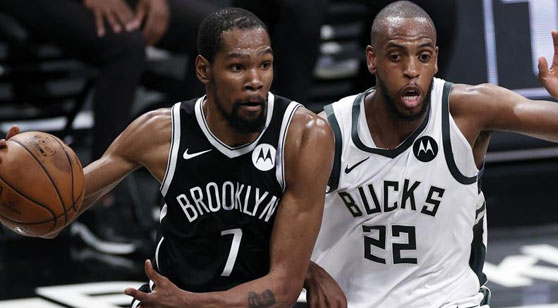 Kevin Durant and the Nets seek a 2-0 series lead on Monday over the Bucks in Game 2 at home. (AP)

The Nets endured a revolving door of injury concerns throughout the regular season, which resulted in Brooklyn’s “Big Three” playing just four games together before the start of this year’s playoffs.

That didn’t seem to matter during their gentleman’s sweep of Boston in the first round though, considering the Nets racked up a lofty total of 124 points per game across those five contests – which can mainly be attributed to superstars Harden, Kevin Durant, and Kyrie Irving knocking down 45% of their 104 long-range attempts in the short series victory.

Most recently though, Milwaukee and Brooklyn squared off in their second-round series opener this past Saturday – which resulted in an eight-point win for the Nets, despite Harden leaving the contest with a hamstring injury early in the first quarter.

Giannis Antetokounmpo played phenomenal for Milwaukee in Game 1, as the two-time MVP racked up 34 points on 67% from the floor during the Bucks’ series-opening loss.

His supporting cast didn’t provide much ‘support’ throughout the event though, as Middleton and Jrue Holiday combined for just 30 points on 13-of-42 from the field – practically negating Antetokounmpo’s magnificent outing.

Irving and Durant assumed an increased offensive workload in Game 1 following Harden’s exit, with the superstar duo teaming up to knock down half of the Nets’ successful field goal attempts in the contest – but only doing it at a 45% clip (23-51 FGA).

What really moved the needle for Brooklyn on Saturday night was the contributions made by its supporting cast – as Joe Harris and Blake Griffin contributed 37 points to the cause while shooting 58% from the floor in the victory.

The following set of matchups took place without Harden towards the beginning of May though, and resulted in a pair of home wins for Milwaukee – as the Bucks escaped with two victories by an average of 4.5 points behind back-to-back monster performances from Antetokounmpo (42.5 PPG, 48% FG).

The totals for Brooklyn-Milwaukee matchups have been set at an average of roughly OU 241 on the year – which includes the bar set for Game 1 this past Saturday continuing to pull that number down a little bit (U 239.5).

After staying 'under' the total in three of four matchups at a combined average of 236 points per game so far this season though, the total for Game 2 between Milwaukee and Brooklyn has finally been adjusted accordingly (OU 233.5).

Like Brooklyn, the ‘over’ in Bucks’ games played very profitably during the regular season – highlighted by the total going over in 57.8% of matchups containing Milwaukee, which ranked second in the conference in that department.

That trend has fizzled out in the playoffs though – considering the total has gone 'under' in three-of-five Bucks’ postseason matchups, which includes a safe 'under' result in Game 1 against Brooklyn.

Before the start of the postseason, there appeared to be very little separation among the top contenders vying to take home this year’s title – with Brooklyn coming in as a moderate favorite at +250 odds, but still a considerable amount of love getting dished out to longshot contenders such as the Lakers (+375), Clippers (+600), Sixers (+750), and Bucks (+950).

Now that the dust has settled from round-one though, the Nets (+175) emerged as the undisputed favorite to take home this year’s title ahead of this second-round series – considering the Lakers and Clippers were both nearly eliminated in their respective matchups, and Philadelphia (+1000) quickly plummeted down the totem pole following Joel Embiid’s hobbling meniscus tear.

Regarding the total, the ‘over’ in Nets’ games played at a very profitable clip during the regular season – with the total going 'over' in 55.6% of matchups containing Brooklyn, which ranked third across the conference in that department.

That high-scoring trend regained prevalence along the Nets’ opening stretch of postseason affairs too – considering the total went 'over' in four of five games during their first-round series against the Celtics.

After surrendering 38 points per game on 49% shooting to The Greek Freak in the regular season, the Nets still couldn’t come up with an adequate defensive solution for Antetokounmpo in their second-round series opener this past Saturday – as the two-time MVP went off for 34 points on 16-of-24 from the floor during the Bucks’ Game 1 loss.

I’ll back Giannis to play just a little bit better here, as Milwaukee probably needs 40 from him to walk out of the Barclays Center with a win in Game 2 – and that still might not be enough to get it done.

As much as I love Brooklyn in this series, I still like Milwaukee – especially without Harden on the floor for the Nets.

And while I don’t quite have the guts to pick them pull off the upset on the road in Game 2 – I do think the Bucks will tighten things up on defense and pay a little more attention to the members of Brooklyn’s supporting cast this time around.

In my opinion, the total for Game 2 still seems too high. I’ll take the 'under'.