Western Conference postseason action will resume on Wednesday night with the Nuggets and Suns set to square off for Game 2 at 9:30 Eastern time on TNT.

So, VI is getting you ready with a variety of betting resources to help handicap the evening’s top matchup.

After coming from behind to beat Denver by 17 in Game 1, the Suns enter their second home matchup of the round as a six-point favorite over the visiting Nuggets – which is right around the same number Phoenix was favored by in the series opener (PHX -6).

The total for Wednesday’s event is currently stationed at OU 222, which also sits in the same ballpark as the number set for this past Monday’s series opener (O 222.5). 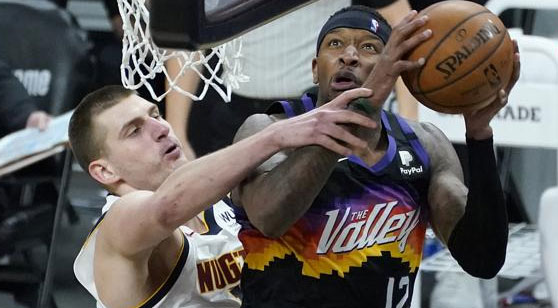 The Suns seek a 2-0 series lead over the Nuggets as the teams hook up on Wednesday in Phoenix. (AP)

After assertively handling business against the defending champs in six games to kick off the postseason, it took the Suns a little while to get back into the swing of things in their second-round series opener against Denver – as Phoenix entered the second half of Game 1 trailing the Nuggets by a point.

The combination of Phoenix’ stifling defense and explosive offense enabled the Suns to easily run away with the victory after the break though – highlighted by Chris Paul and Devin Booker combining for 20 points on nine-of-nine from the field in the fourth quarter.

Denver claimed wins in two-of-three matchups against Phoenix during the regular season – with the Suns picking up a narrow three-point victory in the first meeting, and the Nuggets escaping with a pair of overtime victories in the following two.

Anything that happens during the regular season should be taken with a grain of salt, but Booker didn’t participate in the final overtime matchup and Jamal Murray did – which doesn’t bode well for Denver, considering the opposing superstars’ roles have been reversed for this series.

The Nuggets’ chances of reaching the NBA Finals appeared to be chalked after the season-ending injury to last season's playoff hero Murray back in April.

Things weren’t looking too hot for them after their postseason opener either, as Denver got spanked by Portland at home in Game 1 – leaving Nikola Jokic and company utterly disrespected as a four-point underdog in three of five matchups to close out their first-round series.

The Blazers getting tagged as favorites didn’t mean squat in any of those events though – considering Denver claimed outright victories by an average of 12 points per game across the three first-round matchups Portland was favored in.

The Suns were probably the most doubted second-seed to open the postseason in recent memory – and I too, am guilty of picking L.A. over Phoenix in the first round, but that was before Anthony Davis re-injured himself and left hobbled LeBron James on an island against what has slowly turned into a very dangerous basketball team.

That being said, the Suns have quickly proven that they are a legitimate threat to take home this year’s NBA title – especially if they can make quick work out of Denver in this series and get the veterans on the squad some much-needed recovery time.

It will be interesting to see how the Nuggets respond after getting throttled by 18 points in the second half of Game 1 – but I won’t be shocked if we just see three more games of non-competitive basketball and Denver cracks out the brooms in this series.

After averaging just six points on five shot attempts during the regular season, Facundo Campazzo has consistently served as a relevant contributor to Denver’s offense to start this year’s playoffs – having cracked double-digits scoring in five of his seven postseason outings on an average of 7.5 field goal attempts per contest.

I’ll back the 30-year-old rookie to keep it going here, as Jokic is in dire need of help from his supporting cast in this matchup – and Campazzo is shooting 50% from the field across Denver’s last two games, while still putting up roughly half of those attempts from beyond the arc.

It took a little while for Phoenix to get the ball rolling on offense in Game 1 – highlighted by the Suns shooting just 45% from the field and 33% from beyond the arc during the first half of Monday’s second-round series opener in The Valley.

After a few minor adjustments at the break though, Phoenix couldn’t be stopped in the second half – as the Suns erupted for 65 points on 64% from the floor on the way to claiming a rare come-from-behind blowout victory.

I’ll lay the points with Phoenix here, as Denver’s backcourt clearly couldn’t handle CP3 and Book at either end of the floor towards the conclusion of Game 1 – and I don’t think that was a fluke.