Eastern Conference postseason action will resume on Wednesday night with a pivotal Game 5 between the Hawks and Sixers set to kick off TNT’s nationally televised double-header at 7:30 Eastern time in The City of Brotherly Love.

After blowing an 18-point lead on the road in Game 4, the Sixers return to the Wells Fargo Center as a six-point favorite over the visiting Hawks. 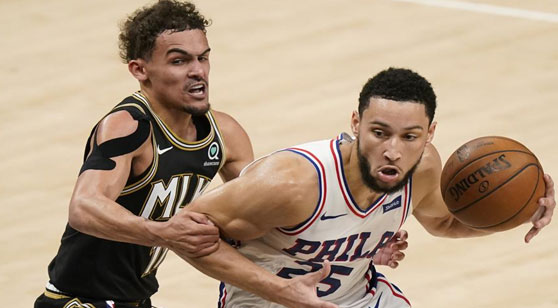 The Hawks and 76ers are all knotted up at 2-2 with a pivotal Game 5 coming up Wednesday night in Philadelphia. (AP)

Only to have that lead slowly shrunken down to four points before the conclusion of the event, as Philadelphia’s suffocating second-half defense nearly paved the way for Joel Embiid and company to pull off a stunning comeback in the opener – outscoring the Hawks 70-54 in the final two stanzas of the narrow loss mainly thanks to Young and Bogdanovic shooting just 2-of-13 from downtown during those periods.

The next few squabbles between them looked a lot like the end of the first matchup, as the Sixers rumbled to a pair of decisive 16-point victories while asserting a convincing series-advantage in Games 2 and 3 – and appeared to have Atlanta on the ropes again in Game 4 by building a commanding 18-point lead in the second quarter.

The Sixers completely fell apart on offense down the stretch of their latest head-scratching loss though, as Embiid contributed just four points 0-of-12 shooting during Philadelphia’s disastrous 38-point performance in the second half of Game 4 – deadlocking this series at two games apiece heading into Wednesday’s Game 5.

Atlanta’s lone win over the Sixers came during Philadelphia’s mid-January COVID-19 crisis, as Ben Simmons, Tobias Harris, Seth Curry, Shake Milton, and Matisse Thybulle were all forced to sit out for health and safety reasons – resulting in an 18-point victory for the Hawks.

The Sixers were healthy for their back-to-back set against Atlanta at the end of April though, and things played out much differently – as Philadelphia throttled the Hawks by an average of 33 points in a pair of home victories to close out the month.

The Hawks played the following three matchups with a chip on their shoulder though, as Atlanta stomped the Knicks by an average of 14 points the rest of the way – which included a dominant series-ending victory at MSG in Game 5 (103-89).

The Hawks were lights out to kick off their series-opener against Philadelphia – outscoring the Sixers, 74-54 in the first half of Game 1, which enabled Atlanta to narrowly cling onto a four-point win in the event.

In their following five ‘halves’ though, the Sixers went on to outscore them by 9.6 points per half – resulting in a pair of dominant double-digit victories for Philadelphia in Games 2 and 3.

After stringing together consecutive dominant outings against Atlanta, the Sixers suffered an epic meltdown in the second half of Game 4 – as Philadelphia scored just 38 points on 32% from the field and 4-of-16 from downtown in the final two stanzas of the shameful loss.

Fortunately, the Sixers will return home to Philadelphia for the fifth matchup of this series – where Philadelphia was 29-7 during the regular season and currently 4-1 this postseason.

After averaging 39.5 points on 54% from the field at home in the first two matchups of this series, Embiid went ice cold during the Sixers’ two-game road trip to Atlanta – averaging just 22 points on 32% shooting across Games 3 and 4.

I’ll back The Process to have a big night in Game 5, as Philadelphia’s superstar typically shines brightest when the stakes are high at home for his team.

Despite their second-half meltdown on the road in Game 4, the Sixers head back to Philadelphia for Game 5 as a six-point favorite over the visiting Hawks.

I’ll lay the points with Philadelphia here – as excluding the first half of Game 1 against Atlanta, the Sixers have been overwhelmingly dominant at the Wells Fargo Center this postseason (+81) and I expect that trend of dominance to continue in Game 5.