Eastern Conference postseason action will resume on Thursday night with Milwaukee set to host Brooklyn for a crucial Game 6 at 8:30 Eastern time on ESPN.

After coming from behind to win Game 5 in Brooklyn by six points, the Nets travel back to Wisconsin for Game 6 as a 5.5-point underdog against the Bucks at Fiserv Forum – marking the heftiest number either team has been favored by in this second-round series.

The total for Thursday’s event has fallen to OU 220, which is the lowest mark set for a matchup between these teams on the year. 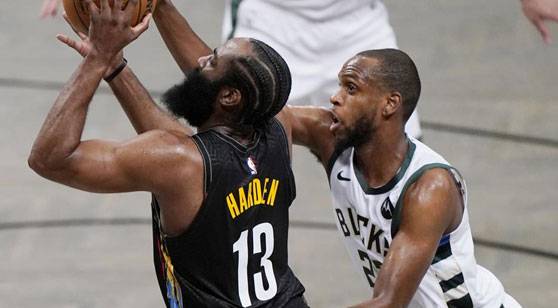 James Harden (L) and the Nets look for their first road win of the series on Thursday at Milwaukee. (AP)

Despite James Harden exiting during the opening moments of this second-round series, its first matchup still belonged to the Nets at home – as Kyrie Irving and Kevin Durant seemed to effortlessly fill the superstar’s scoring void in the event by knocking down half of Brooklyn’s field goals at a 45% mark (23-51 FGA).

Game 2 was like Groundhog’s Day for Milwaukee’s superstar, as again Giannis received very little support during the Bucks’ second loss of the series – highlighted by Middleton and Holiday combining for just 30 points on 13-of-30 from the floor in the contest.

It’s hard to blame Milwaukee for getting blown out in Game 2 though – considering Brooklyn set a franchise-record for made three-pointers in a playoff game during the event (21) and did it at an extremely efficient clip (50%).

The Bucks courageously responded with a pair of their own home victories in the following two matchups – as a horrid shooting performance from Brooklyn in Game 3 and Kyrie’s devastating ankle injury in Game 4 left this series deadlocked at two games apiece heading into its pivotal fifth matchup.

Game 5 at the Barclays Center was all about the greatness of Durant though, as the 11-time All-Star exploded for 49 points, 17 rebounds, and 10 assists on roughly 70% from the field during the narrow come-from-behind victory – single-handedly pushing Milwaukee to the brink of elimination ahead of Thursday’s Game 6 at Fiserv Forum.

Before Game 5, I thought Brooklyn didn’t stand a chance down the stretch of this series if Harden and Irving were both unable to get back on the floor. After the brilliant offensive performance Durant put on this past Tuesday at the Barclays Center though – I surely stand corrected.

Harden valiantly returned to Brooklyn’s lineup and battled through his lingering hamstring injury in Game 5 – but honestly, he might have been better off hanging with Kyrie on the sidelines, considering The Beard scored just five points on 1-of-10 from the field and led both teams in turnovers in the event (4).

There was no need to worry though, as Durant resorted to teaming up with Jeff Green to knock down 24 of Brooklyn’s 38 successful field goals at a 71% clip during the Nets’ six-point victory.

After entering Game 3 staring down the barrel of a second-round sweep, the Bucks (-140) managed to emerge from its two-game home set as the slight favorite in this heading into Game 5 – and rightfully so, considering the prior obscurity concerning Irving and Harden’s respective injuries.

With Harden returning for Brooklyn’s impressive comeback victory in Game 5 though, Milwaukee’s series price has fallen back down to +180 heading into Game 6 – despite the Bucks (-220) being listed as a heavy favorite for Thursday’s matchup.

After sitting out the first four contests of this series with a hamstring injury, Harden finally returned to Brooklyn’s lineup in Game 5 and appeared to have some trouble knocking the rust off in his first game back – scoring just five points 10% from the field during the Nets’ thrilling victory at the Barclays Center this past Tuesday.

I’ll back the Harden to have a big night on the road here though, as the Beard averaged roughly 28 points per game in round-one against Boston with Kyrie on the floor – and I doubt Durant will continue to give Brooklyn 50 every night.

Even with Harden practically serving as Milwaukee’s sixth man in Game 5 (5 points, 1-10 FG), the Nets were still able to pull off a stunning come-from-behind victory at home behind Durant’s magnificent 49-point triple-double – pushing the Bucks to the brink of elimination at home in Game 6.

I’ll take the points with Brooklyn here – as I have to imagine a few more shots will fall for Harden this time around, and the Bucks still haven’t shown an adequate defensive solution for KD whenever he decides to take matters into his own hands.