Eastern Conference postseason action will resume on Saturday night with the Bucks and Nets set to square off for a winner-take-all Game 7 at 8:30 Eastern time on TNT.

After an assertive double-digit victory at home in Game 6 (MIL -5), the Bucks travel back to Brooklyn for Game 7 as a pick-em against the Nets at the Barclays Center.

The total for Saturday’s event is currently stationed at OU 214.5, which is easily the lowest bar set for a matchup in this second-round series. 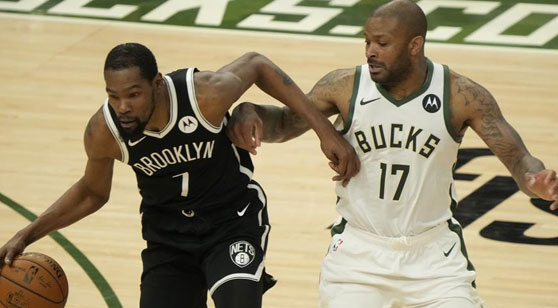 The Nets and Bucks finish off their series on Saturday night at Barclays Center as the home team is so far 6-0. (AP)

Despite James Harden exiting during the opening moments of this second-round series, its first matchup still belonged to the Nets at home – as Kyrie Irving and Kevin Durant effortlessly filled the superstar’s scoring void in the event by knocking down half of Brooklyn’s field goals at a 45% mark (23-51 FGA).

Game 2 was like Groundhog’s Day for Milwaukee’s superstar, as Giannis also received very little support in the Bucks’ second loss of the series – highlighted by Middleton and Holiday combining for just 30 points on 13-of-30 from the floor in the event.

It’s hard to blame Milwaukee for getting blown out in Game 2 though – considering Brooklyn set a franchise-record for made three-pointers in a playoff matchup during the impressive victory (21) and did it at an extremely efficient clip (50%).

The Bucks courageously responded with a pair of their own home victories in the following two matchups – as a horrid shooting performance from Brooklyn in Game 3 and Kyrie’s devastating ankle injury in Game 4 left this series deadlocked at two games apiece heading into its pivotal fifth matchup.

Game 5 at the Barclays Center was all about the offensive jurisdiction of Durant, as Brooklyn’s superstar completely took over the event by scoring 49 points, 17 rebounds, and 10 assists on roughly 70% from the field during the narrow come-from-behind victory – single-handedly pushing Milwaukee to the brink of elimination ahead of Thursday’s Game 6 at Fiserv Forum.

With their backs against the wall at home though, the Bucks’ “Big Three” finally came together and played how the front office previously drew things up in Game 6 – as Antetokounmpo, Middleton, and Holiday teamed up for 89 points on 54% shooting during Milwaukee’s gutsy victory, which nearly surpassed the Nets’ entire team total in the event (104-89).

The Nets, on the other hand, played awful this past Thursday besides Durant and Harden, as the rest of Brooklyn’s rotation chipped in just 41 points at a 38% clip during the agonizing loss – practically robbing its superstars of the chance to close out this series a game early.

Milwaukee picked up wins in two of three matchups against Brooklyn during the regular season – with at least one member of the Nets’ “Big Three” being absent in all those affairs.

After entering Game 3 staring down the barrel of a second-round sweep, the Bucks (-140) managed to emerge from its two-game home set as the slight favorite in this series heading into Game 5 – and rightfully so, considering the prior uncertainty regarding Irving and Harden’s respective injuries.

Following Harden returning for Brooklyn’s thrilling Game 5 victory, Milwaukee’s series price fell back down to +180 heading into Game 6 – despite the Bucks (-220) being listed as a heavy favorite in this past Thursday’s event.

For those looking for a reason to bet on Milwaukee in this matchup – I’m not going to tempt you with one.

The home team has won all six matchups in this series, with four of those victories coming by double-digits – and Milwaukee still seems to wield far less offensive weaponry than Brooklyn does, even without Kyrie on the floor.

Despite efficiently leading the Nets in scoring, Durant wasn’t quite as pressing during Brooklyn’s ugly loss in Milwaukee this past Thursday – as the 11-time All-Star followed up his 49-point triple-double in Game 5 with just 32 points on 50% shooting in Game 6.

Some of Durant’s regression can be attributed to Harden (16 points, 5-9 FG) appearing slightly healthier during Brooklyn’s underwhelming closeout effort in Milwaukee this past Thursday – leaving KD a little more willing to give up the steering wheel on offense.

In my opinion though, Durant played Game 6 with the mindset that Brooklyn didn’t really “need” to win – which is a dangerous mentality to have, nonetheless still realistic and accurate.

After Harden’s efficient low-volume performance this past Thursday, I’m not exactly sure what to expect from the Beard heading into Saturday’s series finale – but it probably won’t matter too much, as I expect to see another exceptionally aggressive offensive outing from the Slim Reaper.

After being relatively quiet in the first four contests of this series (29.7 PPG, 24 FGA), Durant completely took over at the helm of Brooklyn’s offensive attack in Games 5 and 6 – averaging 40.5 points on 26.5 field goal attempts across the Nets’ latest pair of postseason matchups.

I’ll back Durant to erupt again here, as I expect Brooklyn’s offensive game plan to appear strikingly similar to the one used in Game 5 – which was “get the ball to KD.”

After six games of hard-fought back-and-forth action, Brooklyn travels back to the Barclays Center for Game 7 as a pick-em against the visiting Bucks – despite the home team winning all six contests in this series by an average of roughly 14 points per victory.

I’ll take the Nets in Game 7 here, as homecourt advantage has already proven to be a hefty differentiator throughout this series – and I still think Steve Nash has the far more talented squad in this matchup.