The Eastern Conference Finals will resume on TNT this Friday night with the Hawks and Bucks set to square off for Game 2 in Milwaukee, Wisconsin at 8:30 Eastern time.

After a heartbreaking loss in the series opener this past Wednesday, Milwaukee heads into Game 2 at Fiserv Forum as a 7.5-point favorite over the visiting Hawks – which is roughly the same as Game 1 (ATL +8).

The total for Friday’s event is still stationed at OU 226 – which also sits in the same ballpark as the number set for Atlanta’s high-scoring victory in Game 1 (O 225.5). 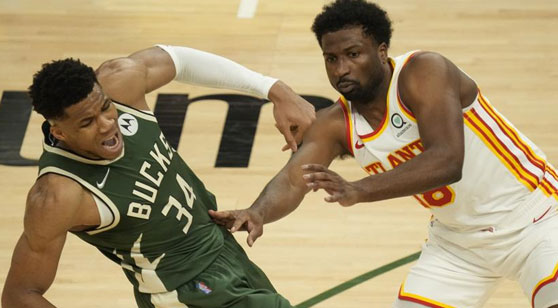 Giannis Antetokounmpo and the Bucks look to rebound from a Game 1 loss to the Hawks in the Eastern Conference Finals. (AP)

After a pair of grueling seven-game victories over heavily favored opponents in the previous round, Milwaukee and Atlanta surprisingly emerged from their respective Game 7’s as the final teams standing in the Eastern playoff bracket – setting the stage for a somewhat unforeseen conference finals matchup.

All that said, the oddsmakers still went all-in on Milwaukee from the jump in this year’s ECF matchup – tagging the Bucks as eight-point favorites in Game 1 while listing them as a -500 favorite to win the series.

Milwaukee’s balloon of confidence was quickly popped at home in Game 1 though, as Giannis Antetokounmpo and Jrue Holiday combined for 67 points on 56% shooting across Wednesday’s series opener – but it wasn’t quite enough to fend off the Hawks’ late-game scoring invasion propelled by Trae Young (48 points).