The Eastern Conference Finals will resume at State Farm Arena in Atlanta this Tuesday night with the Bucks and Hawks set to square off for a crucial Game 4 at 8:30 Eastern time on TNT.

After letting Game 3 slip away in the fourth quarter on Sunday night, the Hawks return to State Farm Arena for Game 4 of the Eastern Conference Finals as a six-point underdog against the visiting Bucks – which is a few notches up the ladder from the previous line set between these teams (MIL -5.5).

The over-under for Tuesday’s fourth ECF matchup has fallen to OU 219 – which is the lowest total set for a contest in this series. 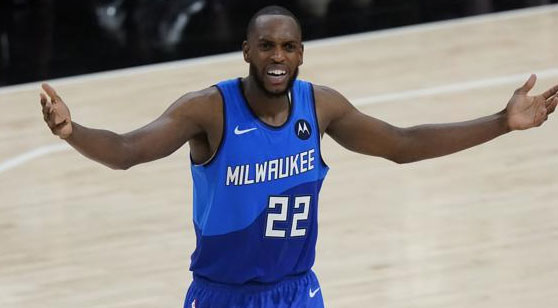 Bucks' guard Kris Middleton is coming off a strong game as Milwaukee seeks a 3-1 series lead over Atlanta. (AP)

That enormous wager wasn’t looking great after Game 1 too, as Giannis Antetokounmpo and Jrue Holiday combined for an impressive 67 points on 56% shooting across Wednesday’s series opener – but it wasn’t quite enough to fend off Atlanta’s late-game scoring invasion propelled by Trae Young (48 points).

The Bucks came ferociously charging back though, as Milwaukee quickly turned the tables on Atlanta with a pair of commanding double-digit victories in Games 2 and 3 – leaving the Hawks in a highly vulnerable position ahead of Tuesday’s fourth matchup at State Farm Arena, especially with Young now dealing with a bruised right ankle.

After stomping the Hawks by 34 at Fiserv Forum in Game 2, it looked like most of Milwaukee’s starting lineup left its best stuff at home on Sunday night – as Holiday, P.J. Tucker, and Brook Lopez combined for just 19 points on 35% shooting throughout the third event of this series.

Fortunately, Antetokounmpo and Khris Middleton had absolute field days at State Farm Arena in Game 3 – as the Bucks’ superstar duo teamed up for 71 points on 59.5% shooting to propel Milwaukee to a second straight double-digit victory over Atlanta.

Despite knocking off the top-seeded Sixers in the previous round, Atlanta (+375) still entered this year’s Eastern Conference Finals as heavy underdogs against Milwaukee (-500).

Those prices were both briefly chopped in half following Atlanta’s thrilling win in Game 1 at Fiserv Forum (-200/+170) – but after rumbling back with two straight double-digit victories in Games 2 and 3, the Bucks (-2000) have returned to their pedestal of heavy favorites over Atlanta (+900) in this series.

After averaging seven points on 7.5 field goal attempts in Games 6 and 7 against Brooklyn, Tucker has scored a total of just eight points on seven shot attempts to kick off the Eastern Conference Finals against Atlanta – which averages out to 2.7 points on 2.3 FGA across those three events.

I’ll back Tucker to stay 'under' again here, as he’s scored five points or more in just 4-of-14 postseason outings so far – and I doubt P.J. will be receiving a spike in offensive usage anytime soon.

After staying 'under' the number in back-to-back events by posting an average of 215.5 points across Games 2 and 3, the total for Tuesday’s fourth ECF matchup has fallen to OU 219 – which is the lowest bar set for a contest in this series.

I’ll take the 'under' in Game 4, as I have a feeling Atlanta will noticeably tighten things up on defense for the rest of this series – and there’s probably a good chance Milwaukee takes its foot off the gas a little bit after posting consecutive double-digit victories in Games 2 and 3.