When the 2021 NFL season kicks off in about a month, the seven fresh-faced rookie head coaches that will be patrolling the sidelines is the largest number of rookie head coaches in the league since 2013 when seven 1st time coaches found a gig as the head man (2013 was Bruce Arians first season in Arizona officially as a head coach, even though he filled that role in 2012 for the Colts while Chuck Pagano had to step away).

The seven new head coaches that will take the field this year for the first time as the head man with Atlanta, Detroit, Houston, Jacksonville, L.A. Chargers, New York Jets, and Philadelphia all step into a spot that 83 former 1st time coaches have experienced in the NFL since realignment.

The history of the 83 former 1st time NFL head coaches in that span tell an interesting story overall, but for now, let's focus on what we should expect from those seven clubs when they venture out on the road for the first time in 2021.

As you can see from that chart, the SU record of these rookie head coaches in their first road game is a dismal 32-51 SU overall (38.5% success rate). Since the start of the 2017 season, rookie coaches in their first road game are just 4-15 SU (21% success rate), with the three representatives from last year (Carolina, Cleveland, N.Y. Giants) going 0-for-3 in that regard even though they didn't really have to deal with the usual heckling/crowd noise etc that was non existent with no fans allowed to attend.

The kicker here is that rookie head coaches tend to be saddled with bad/losing teams from the year before and that there is going to be multiple steps that need to be taken in order for the franchise to become successful again.

That's not always the case (coaches could retire, or a change of voice may be needed for a good team that can't get over the hump), but it's the common situation that almost lends itself to fading these new coaches early on in the season as they figure out the best scheduling and preparation methods for themselves and their team as the year goes on.

But as bettors what could that mean for Week 1 lines?

Well, to start, two of the debuting coaches (Jacksonville/Houston) meet in Week 1, with the Jaguars currently laying -3 on the road. That number has a lot to do with the QB situation in Houston, but with historical numbers like that, it's got to be hard to get behind the Jags at this number, as not only do they have a rookie NFL head coach for that game, but it's likely also to be the first road game for rookie QB Trevor Lawrence as well.

It's hard to expect (or know what to expect) from Houston right now given the situation with QB Deshaun Watson, but regardless, it would have to be taking the points with the Texans (which could climb even higher depending how the Watson situation is handled) or simply passing on this game all together.

That's not the only game that puts two new coaches head-to-head right off the bat either, as Philadelphia (+3.5) goes to Atlanta (-3.5) to face the Falcons. This a game that's a bit different from the Jacksonville/Houston one in that the Eagles aren't road favorites in this spot, and that hook on the +3 does bring taking the points with Philly a potential option. (Data on rookie head coaches in their first home game is coming in Part 2).

Other teams with first time head coaches beginning the year on the road include the L.A. Chargers (-1) at Washington, and the N.Y. Jets (+4) at Carolina. Again with the Chargers we've got the rookie head coach laying points on the road which has seen past coaches in that spot (as road favorites in first road game) go 8-6 SU in that role since realignment (2002-03) and 6-2 ATS.

That's the counter argument for those looking to back the Chargers in Week 1 (and Jacksonville), but at the same time, only one of those six ATS wins for debuting coaches laying chalk on the road has come since the start of the 2015 season (Cleveland's 23-3 win at N.Y. Jets in 2019).

Against the Spread Results

While the picture of backing rookie coaches outright in their first game is rather bleak historically at 32-51 SU since realignment, the ATS results are actually much better: 49-32-2 ATS.

Again, the caveat here is that a lot of time these first time coaches are coaching rebuilding/bad teams and will be catching quite a few points in their first games away from home, and these lines can be somewhat inflated given market perception on the coaching hire, the new team he's in charge of, and/or the quality of opponent they are facing.

But backing these rookie coaches ATS on the road isn't just something that's worked rather well over the past 19 seasons, as it's on a 19-9-1 ATS run since the start of the 2014 season, including a stretch from 2014 through 2016 where it went 9-1 ATS.

Only two of those 19 ATS victories came from rookie coaches who were road favorites in their first career road game, so if you are looking to back debuting coaches in their first road game, leaning towards taking the points with teams – Philadelphia and N.Y. Jets – is probably a good place to start.

Total players can hunt for angles in this data as well, as first time coaches are 39-44 O/U in those first career road games for them.

In terms of recent data, bettors shouldn't go out and expect a lot of points in any of those Week 1 road games already mention, as since the start of the 2018 season, the O/U record in this scenario sits at 4-10 O/U.

The three coaches in that span that won their road debuts outright (Cleveland and Green Bay in 2019, Indy in 2018) all easily cashed 'under' tickets as well. But what might be most impressive in that that three-game sample size is the fact that none of those three teams even gave up 10 points in their coach's road debut, and only the Browns went into the game as a favorite.

So total bettors that do believe one of these rookie head coaches will start the year out 1-0 SU away from home may want to add an 'under' selection to their card as well. 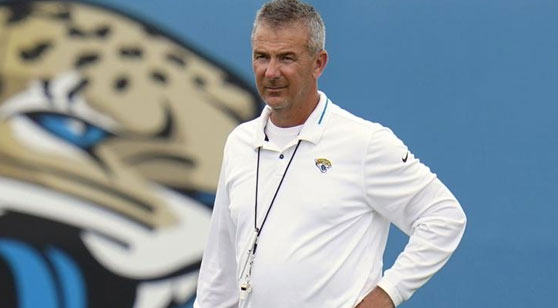 Urban Meyer and the re-tooled Jaguars begin the 2021 campaign in Houston against the Texans as short favorites. (AP)

What week does that first road game come for these teams?

Keen readers will know that I said there are seven debuting coaches this year and yet I've really only mentioned games involving six teams. The outlier there is the Detroit Lions, as they begin the year at home as +7.5 underdogs vs San Francisco. That prompted me to break things down by week for these rookie head coaches as both Houston and Atlanta are in a similar position in that they open the year at home and won't head out on the road until Week 2.

Going back to realignment again, rookie coaches that are debuting on the road in Week 1 are 14-24 SU, 22-14-2 ATS, and 16-22 O/U overall. Again that suggests that bettors should really only be looking to take points with these squads as the SU and ATS records have quite the disparity. More good news for Eagles and Jets fans, even though the Jets are like the Jaguars in that they'll also likely debut a rookie QB in that first road game as well.

More recent times show that rookie head coaches on the road in Week 1 specifically are on a 10-4-1 ATS run since the start of the 2013 season, but they are also just 5-10 SU in those contests as well, so stick to taking the points if you can.

Lions, Falcons, and Texans fans are going to have to wait until Week 2 to make a decision on how they'd like to bet their debuting coach in his first crack at things away from home, but the numbers are quite similar.

These teams are only 7-9 SU in those 16 games, so again taking points with them is ideal, but the two times we did have these rookie head coaches as road chalk in Week 2 (Cleveland in 2020, Houston in 2014) they went 2-0 SU and ATS, winning by an average of 18 points. Now it's just a two-game sample size so take it with a grain of salt, and chances are it won't apply this year with all three of these teams (Detroit, Atlanta, Houston), visiting playoff teams from a year ago (Green Bay, Tampa Bay, Cleveland respectively).

Maybe we get a situation where these big favorites just end up laying too many points, be it from opening numbers or market pressure.

But hitting at a 62% clip blind in this role over the course of 19 seasons is nothing to shake your head at, and depending on what spreads we end up seeing in Week 2 – and of course the yearly Week 1 overreaction hot takes influencing some of that – chances are a couple of these ugly underdogs with rookie coaches are going to cash some ATS tickets in those matchups.