There is one more NFL futures market I thought was best to take a look at historically, and that was trying to put together a basic profile of what a new playoff team looked like the year prior. Everyone always debates which teams will be among the 4-6 new playoff teams this league sees each year and it's always an interesting topic.

Earlier in the summer, I took the opposite approach and looked at how at least one team that ended their season with a home playoff home loss came back to win their division the following season. After all, 4-6 new teams in the NFL playoffs means there will be plenty of the same teams still clinging onto that potential championship window.

New toys are always the most exciting though, and with the idea of keeping things as simple as possible – looking at win/loss record, points per game, points allowed per game, and turnover margin – over the past five years, the teams that have been playoff newcomers have had some interesting patterns over the past five seasons.

I've got to start with the wildest one too

#1: Over the past five seasons, at least one team that finished 30th or worse in points per game the previous season makes the playoffs.

I'd like to officially welcome one of the Jacksonville Jaguars (30th), N.Y. Giants (31st) or N.Y. Jets (32nd) to the 2021 NFL playoffs as they were the three teams to finish with in that bottom three. But for reasons I can't figure out, this has been something that's happened every year since the 2016 Dallas Cowboys made the playoffs after finishing 31s in points/game in 2015.

#2: Over the past five seasons, at least one team with 4 or fewer wins has made the leap to being a playoff team the following season

Another historical checkmark for the Jets and Jaguars having a potential playoff-caliber year in 2021, although the fewest wins in the previous season by any of past seven teams to accomplish the feat was three, theoretically eliminating the 2-15 SU Jets and 1-15 SU Jaguars from contention here.

Philadelphia is the only team to qualify from the NFC North here despite the entire division being sub-.500 in 2020, and the Eagles may be the team here that has the least resistance within the division to potentially keep this streak alive.

Atlanta's an interesting team if you think they can get by New Orleans this year, but most are still going to have them 2nd place to defending Super Bowl champion Tampa Bay in the NFC South division as well. Figuring any Falcons 2021 playoff hopes rely on them sneaking into a Wildcard spot is a little too tight for me though.

#3: Four of the past five years have seen a team that finished in the Top 10 in Turnover margin and miss the playoffs, go on to make the playoffs the following year

Not all bad news for Atlanta here even though they come in on the very end of the threshold with the Chargers and Patriots as well. There is plenty of randomness in turnovers, but to finish the season positive in that regard and not be a playoff team can mean only a few things.

You could have just gotten beaten out by a game like Miami did, although they were a team that did see their own offense commit those costly turnovers – the ones in either red zone – a few times too many. Not unexpected with a rookie QB under center and almost by accident that should be cleaned up a bit in Year 2 for Tua. If the Dolphins can keep being strong defensively as well, no reason to think they can't at least give Buffalo a scare at worst for this division.

New England's there as well and the Patriots are expected to be a very physical football team in the trenches this year. But Newton's been prone to turnovers at times in his career, and although the highly praised Mac Jones would be the other option, he's still a rookie QB and turnovers are a part of that gig. Two of the four teams on this list (Miami, L.A. Chargers) are there because they played rookie QB's in 2020.

So Miami's by far the best of the bunch here, although things are getting a little stronger for Atlanta's playoff case as well.

#4: Four of the past five years we've had a non-playoff team that finished in the Top 10 in points per game, they've gone on to make the playoffs the following year

The 2016 N.Y. Giants were the first in this span to accomplish the feat after finishing 6th in points/game the year before. 2016 was also a year we saw the New Orleans Saints go 7-9 SU despite being 2nd in the NFL in points/game, but they got things in order the following year to get into a playoff season that ultimately ended in heartbreak.

But it's the 80% hit rate (in a small, five-year sample) that's interesting simply because there is only one team that fits the bill in 2021; the Las Vegas Raiders.

The Raiders are at the bottom of the threshold here sitting in 10th after putting up 27.1 points/game last year. The nine teams ahead of them were all playoff teams though, a place this history says Las Vegas will find themselves this year.

Any Raiders “yes” case (+350) for the playoffs this year is interesting because the market is generally so down on this team with the Derek Carr/Jon Gruden combo. But you've got to expect a sizable jump in home field edge for this Raiders team now that fans are going to be back, and Las Vegas was 6-2 SU on the road last year (in an 8-8 SU season), after going 1-7 SU on the road the previous season.

The Raiders are also a team like the Falcons where you have to figure they are only likely playing for a Wild Card given the powerhouse (KC) atop their division, but they also gave the Chiefs fits last year.

The overwhelming negative sentiment for the Raiders in the market does make me want to believe in this historical trend – and the idea of the Raiders being far better at home – but it is still the Carr/Gruden combo that brings hesitance on pulling the trigger.

#5: Three of the past five seasons have seen one of the three teams to finish 30th or worse in turnover margin go on to make the playoffs the following year

Here is another spot where the Raiders land, and fundamentally this idea does have some sense to it.

A year filled with turnovers is going to be one where either a QB change has happened in the off-season, or where a team just got snake-bit too many times with the turnover luck and that it's highly unlikely it repeats itself.

A negative turnover margin from one year to the next can't be too worrisome given the expectations the 49ers have this season after landing on this list as well. It's interesting that San Francisco and Las Vegas have generally been talked about in such a different light these past few months regarding their 2021 prospects that you'd never guess they'd both be a part of this list.

Obviously Vegas didn't have to deal with the QB injuries that the 49ers did a year ago and that's a big reason for the different perspectives, but Jimmy Garoppolo has only played more than six games in a season once in his career (2019 SB year) and if that continues, then it's the whole rookie QB thing I don't particularly want to be a part of.

The fact that this is a trend that can be such luck-based and is easy to figure the worst teams won't be the worst again year-over-year, it's actually the Raiders that may have the best case in the end to continue this pattern. Luck and Las Vegas tend to go hand in hand.

#6: Each of the last four years have had teams that finished in the Top 10 in points allowed per game and miss the playoffs, go on to make the playoffs the following season.

Keeping it simple was the goal, and when you boil the game down to it's end result it's just about who scored more points than the other. If franchises are able to keep strong defensive units together and keep them improving – and by all accounts all three of these teams have – then a playoff year the following season is definitely not out of the question. 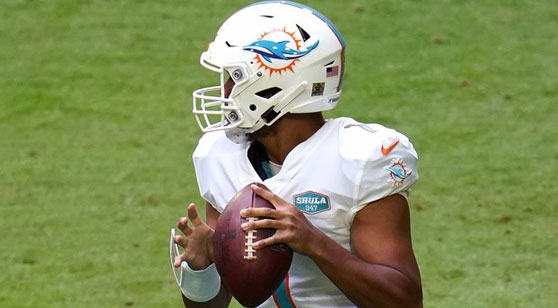 Tua Tagovailoa looks to lead the Dolphins to the playoffs in his second season as quarterback. (AP)

Three of the seven new playoff teams in 2018 had Top 10 defenses in points allowed/game in 2017 (Chicago, Baltimore, LA Chargers), with the Bears and Steelers being the teams to do it last year after finishing 4th and 5th in that category respectively in 2019.

Considering the divisions all three teams play in I really don't think you can completely rule out a division title. The idea of playing for 2nd place exists with all the AFC East teams not named Buffalo for the most part, but it will be interesting to see how the Bills handle success. It's also interesting that the two AFC East rivals on this list for Buffalo are led by Bill Belichick and a Bill Belichick disciple. Going against anything Belichick-related can sometimes feel like banging your head off the wall.

Have to make some selections after that walkthrough, and we've got to include at least one of the Jets/Giants/Jaguars (last three in points/game), and one of those 2020 teams that finished with four wins or less. A strong defense is needed in the form of showing up in either turnover margin or points allowed/game, and it never hurts to have a little good luck coming your way after suffering through some awful luck the previous year (worst three in turnover margin).