It's going to look a heck of a lot different then any season opener we've had in the past, but the 2020 NFL season begins in earnest on Thursday. The league has to hope they can get through the year with minimal issues to crown a champion in early February as per usual, but that's far from a given for the first time ever.

We've got some teams allowing fans and most teams not, meaning any home field acknowledgement for the Cowboys and Chargers automatically gets a boost because no matter what they decide, any amount of fewer fans in the stadium means far fewer road fans for both of those teams to deal with.

But it's the defending champs up first, as the Kansas City Chiefs open up the 2020 year at home, in front of a limited capacity, against the same Houston Texans team that they beat in the Divisional round of last year's playoffs, trailing 24-0 to Houston in that game early.

The Texans made one of the surprising moves of the offseason as well when they traded away wide receiver DeAndre Hopkins, so you can understand why the numbers on both the side and the total came out as high as they did.

The Chiefs have been installed as the largest betting favorites in Week 1, as most sportsbooks have them listed as nine-point favorites.

Also, the 'over/under' of 54.5 is the highest total for the opening NFL weekend. 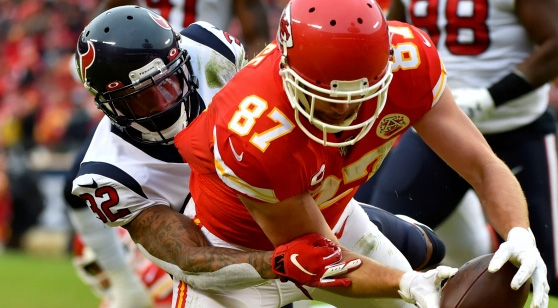 The Chiefs and Texans have watched the 'over' cash in their last three meetings. (AP)

Not only did Kansas City have minimal issues erasing that 24-0 deficit in that playoff game, the Chiefs went on to win the game by 20 points in the end. The 82 points that these teams put up, in the fashion they put them up in, won't be forgotten for awhile. So opening the total at 55 or even higher made a lot of sense.

As did the initial sentiment for the 'under' being it is the first 'live' game for both sides and it could end up looking a lot like Week 1 of preseasons in the past in that regard. Support has since returned for the 'over' now to have the number settling in at 54.5 for some time now. Chances are it only goes up though as this game gets closer to kick-off.

And even with things being based off last game and the 82 points they put up, we could see these two play a 31-27 game almost by accident if they both are clicking well. But how likely is that going to be after an entirely new, and different off-season for everyone? Some of the piss poor tackling that plagued a few college football teams in their openers recently has to be another concern for 'under' bettors, but that playoff game was filled with boatloads of energy for how it was playing out. Where is that energy going to come from if either one of these teams fall down by multiple scores?

Limited capacity is still better than nothing I guess, but to all these guys who've grown up playing in packed college and pro stadiums, there is going to be a huge initial adjustment. Tackling issues would be my biggest worry about an 'under' position, but it's there where I would likely land.

Too much uncertainty fro me in Week 1 to really get heavily involved in too many totals, but over the past five years, Super Bowl Champs that faced a team they dispatched en route to that title the following year are actually 2-5 O/U overall. It only happened in the Patriots/Chiefs regular season meeting last year which was a no-doubt 'under' winner (23-16 game), but both of Philly's rematches against (Atlanta, Minnesota) following their title ended in games that cashed 'under' tickets as well, and none of the three had more than 44 total points.

We probably get more than that here, and with a 31-27 game being something these two could back into late, I am passing on this total. But it would be 'under' or nothing.

Texans vs. Chiefs
Handicapping the Side

The side is somewhere I'm not passing on though, as in that same research of finding games where the Super Bowl champ faces a team they dispatched on that playoff run (aka facing a team that has playoff revenge against them), a 5-2 ATS record with 3 SU wins was uncovered over the past five years as well.

One of those two ATS wins for the defending champs came by the hook as well (New England in 2017 over Pittsburgh), so if there ever was a time to buy into the revenge angle, it seems to be at least of late, doing so when it's playoff revenge against the champs is not a bad idea.

And quite frankly, it's not a horrible idea with this spread as high as it is. Because even for all of Hopkins greatness at the WR position, it's not like Houston won't find some level of success with whatever group of guys they use to try and replace that production. The Texans also had all summer - when they couldn't go out and do normal activities to begin with – to break down that Divisional game film down over and over again to learn what clearly didn't work when they couldn't hold onto the lead.

KC doesn't get to spend all pregame getting showered with love from a packed house celebrating last year's glory because there just won't be a packed house. Tough to have a moment like that become so much different for guys, and then still find the energy to be at their best – after no preseason games mind you – and be expected to win a game by double digits.

Yes, Super Bowl winners have been a great team to historically back in Week 1 this century, but the last two times that strategy didn't cash a ticket (0-1-1 ATS) came in the two games the defending champs were laying at least a TD like the Chiefs are here (New England -7 vs Pitt in 2015 pushed, New England -8 vs KC in 2017 lost).

Just too many points to give a team that's not going to be as bad off as many may believe after the offseason moves they made. By making a point to swap a pass catcher for a runner, you can assume Houston does want to transfer into more of a ball possession, ground attack team that plays strong defense. If they do that according to the script in this one, the game will be kept within a TD.