I don't know what it is about Patriots/Seahawks games, but they always come down to the end, and you'd better hope you're on the team that's leading at that stage, because both sides haven't been able to punch it in on the ground from short distance after Newton and the Pats got stuffed last week.

Not sure this week's game will be able to top last week's ending to SNF, but you know an Aaron Rodgers vs. Drew Brees showdown does bring potential for plenty of other interesting fireworks going off late.

Considering Brees has been on the wrong end of plenty of criticism this week about whether or not he's still got “it” to be a capable starting NFL QB, and it will be interesting to see how he and the Saints respond. And whether or not WR Michael Thomas gets back on the field and what kind of shape his status leaves this line by the time kickoff arrives.

For Green Bay, the Aaron Rodgers FU Tour to the world is looking to continue indoors this week, as he's spent the past two weeks hanging 40 + on two division rivals. People still want to talk about how the organization didn't draft some immediate pass catching help in a pass catching draft for Rodgers, but how about what he's doing with the receiving core he's got already in uniform.

Sometimes that flashy top draft choice isn't all he's cut out to be, and with Rodgers generally always having a good idea about how looks defenses will give him – shade Davante Adams in coverage and work from there – he can pinpoint the route he believes is the best first option.

In fact, not having that secondary “name” out there running routes may actually be working to Green Bay's advantage right now because as long those guys win their individual matchup on each play, someone's going to be wide open with a very little chance of secondary help coming immediately. Two straight weeks of scoring 40+ and it's tough to argue with the results. 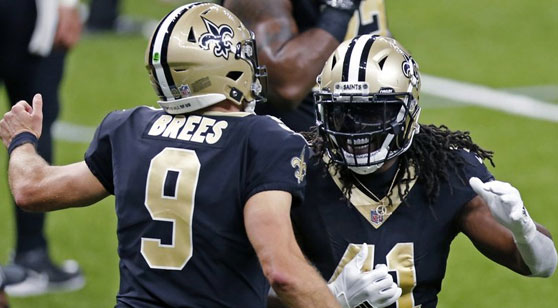 The Saints return home following a loss at Las Vegas as New Orleans is a slight favorite against Green Bay. (AP)

The funny thing about this game from a total perspective is that having Rodgers and the Packers off back-to-back 40+ efforts, coming into a fast, indoor track where noise is not going to be a problem at all, all the prevailing thoughts will be here will be on the 'over'.

And yet, from a market perspective approach, knowing that suggests that letting this total keep climbing and then going 'low' with the 'under' on it makes quite a bit of sense too. After all, questions about whether or not Brees and the Saints still got it are lingering out in the open now, and what if the can't score the football.

Going against the market and looking low is going to be the position I end up siding with more often than not, but I want no problem of an 'under' with Rodgers indoors here. Even as I do generally believe older QB's like Brees and Brady get overrated late in their careers because of name status and not the facts that they are early 40's QB's out there playing a young man's game, I'm not ready to completely write off Brees and the Saints just yet.

A return by Thomas could be all the Saints need to get going again, and it's because it operates in that similar fashion that Adams does for Green Bay. He gives Brees the knowledge of the defense likely shading things his way more often than not, and then the ability to work off of that and find the open man.

Remember, New Orleans still put up 24 points without the services of Thomas last week, and what's kind of gotten lost in Green Bay's 2-0 start and all the Rodgers love is the fact that the Packers defense has still allowed an average 27.5 points per game this year. Only two games yes, but Brees is by far the best QB of the bunch to take a crack at this Packers defense this year as well.

Long winded way of making this total an easy one to pass on. No reason to go contrarian for contrarian sake and sweat an 'under' for the full 60 minutes, and no reason to jump on with the masses simply wanting action and cursing yourself for not being disciplined enough to stay away when this game is 17-13 going into the 4th quarter and you need three TD's plus.

Packers vs. Saints
Handicapping the Side

It's been nothing but Packers money since this line came out, as this chatter about whether Brees is done or not has really started to take root in the market. I view it as he's on his way to being done, and the market correction we seem to see coming in on the Saints now is probably where they should have started being a little overrated to begin with.

Either way, it's still just three weeks in and it's no time to panic. The Saints are 1-1 SU and lost when they didn't have their best weapon on offense. Things should be alright Saints fans.

But with how good the Packers have looked through two weeks, early support on their side was always going to show up regardless of what the Saints did on MNF. A line that did open as high as -6 in spots was about the best example out there of how the Saints were overrated to begin with and it appear the market has caught up quickly with them. All well and good.

Yet, a move from the -6 range to the -3 range is a little too large not to start seriously considering the Saints side now. New Orleans has reached that “buy low” option now where there is minimal belief in this team right now – especially from the minimal belief from bettors that they (bettors) had this team pegged correctly before the season (a supposed legitimate contender) and that makes said team difficult to cap.

So most moves if they come, are going to be against teams in those spots. The market quickly took advantage of what opened up as a bad number, but the money that has continued to push it down further is worth questioning.

Green Bay has looked spectacular through two weeks, but outside of falling down early to Detroit, what has really gone wrong for them? How often do NFL teams continue to look great and break great for weeks in a row?

Not saying it doesn't happen, but any Green Bay ATS money now has missed the boat (even if it wins), and betting into the worst of the number on a team that's been able to gloss over some concerns on defense because of their spectacular play on offense is not a handicapping practice I want to routinely get into.

The Saints have covered the number in each of their last four tries to do so after failing to cover the spread the week before, and with Brees hearing all the critics out there and Rodgers hearing nothing but praise, maybe it's the longstanding Saints QB who decides to kick off his own FU Tour this week with a vintage performance to knock off a quality foe like the Packers.

At these current prices, backing a Saints team that's become slightly abandoned by the market this week is the only way I can look.