Pittsburgh has fared well in the preseason over the last few seasons under head coach Mike Tomlin, as the Steelers and Cowboys kick off the 2021 exhibition campaign in Canton, Ohio.

The Cowboys have dropped six of their last eight preseason contests as points should be at a premium in this game. 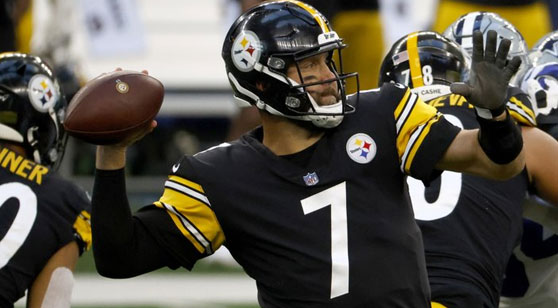 Ben Roethlsberger and the Steelers face the Cowboys in the Hall of Fame game in Canton, Ohio. (AP)

It was a disastrous season in Dallas with a capital "D" as the Cowboys lost quarterback Dak Prescott to a fractured ankle in October and limped to a 6-10 record in the miserable NFC East.

The Cowboys actually won three of their final four games after starting 3-9, which included outright wins as home underdogs against the Eagles and 49ers.

The Steelers captured the AFC North title following an 11-0 start, but lost four of their final games and were torched for 48 points by rival Cleveland in the Wild Card round.

Pittsburgh held off Dallas, 24-19 as hefty 14-point favorites last November in Arlington, but Prescott was sidelined for the Cowboys. Dallas actually led, 13-0 late in the second quarter, but the Steelers outscored the Cowboys, 24-6 the rest of the way.

Both the Steelers and Cowboys are playing their seventh Hall of Fame game, which marks the most by any NFL team. Each squad owns identical 3-3 records in this contest, as Dallas last participated in 2017 and Pittsburgh last played in Canton in 2015.

These teams were due to meet in this game last season, but the COVID-19 pandemic wiped the contest out. The Cowboys held off the Cardinals, 20-18 in the 2017 edition, while the Steelers lost to the Vikings in 2015.

The Hall of Fame game is usually a low-scoring affair, as the last contest in Canton came in 2019 with the Broncos edging the Falcons, 14-10 to easily stay 'under' the total of 35.

Since 2010, the 'under' is 6-2 in the last eight Hall of Fame games, while the winning team has scored 17 points or less six times during this span.