Dallas couldn't produce a touchdown in last week's 13-point loss to Pittsburgh in the Hall of Fame Game.

The Cowboys will turn to the quarterback trio of Cooper Rush, Garrett Gilbert, and Ben DiNucci, who combined for 238 yards passing against the Steelers.

Arizona lost three of four preseason games two years ago, while getting outgained in all four contests. 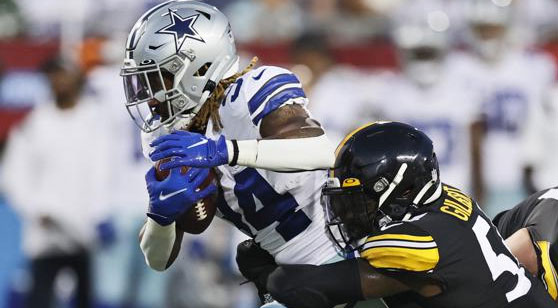 The Cowboys are coming off a loss to the Steelers last week as Dallas travels to Arizona on Friday. (AP)

The Cowboys are the second team to play their second preseason game already after losing to the Steelers in the Hall of Fame Game last Thursday, 16-3.

Dallas outgained by nearly 100 yards, but turned the ball over three times and missed two field goals, while the game finished 'under' the total of 32.

To no one's surprise, Cowboys' quarterback Dak Prescott sat out that game and will be sidelined again on Friday with a shoulder injury.

Kliff Kingsbury enters his third season as head coach of the Cardinals, coming off an 8-8 campaign in 2020.

Arizona owned an 8-6 record before losing its final two games against division rivals San Francisco and Los Angeles to miss the playoffs for the fifth consecutive season.

The good news is quarterback Kyler Murray threw for nearly 4,000 yards in his second season, while wide receiver DeAndre Hopkins ranked third in the league in receiving yards with 1,407.

Cardinals coach Kliff Kingsbury isn't sure how much his starters will play Friday night against the visiting Cowboys but said, "I would expect most guys to get some action." He said QB Kyler Murray will definitely play.