While preseason may have just started a couple of weeks ago, the Seahawks and Chargers are already wishing it farewell with this final Week 3 game. The Chargers are coming into this game 1-1, with two fairly uneventful games under their belt.

The Seahawks are currently 0-2 with two blowout losses to the Raiders and Broncos. The Seahawks have been resting their starters throughout camp, but it does appear that Russell Wilson will suit up for a couple of series on Saturday.

In this game, I’m siding with the Chargers at +5 along with the second half spread if you have that available. They are underdogs because Wilson, and some of the Seahawks first team, are expected to play but we all know the preseason is about depth.

They have scored a combined 10 points through two games so far against middling opponents, the Chargers have shown some promise with their second and third units. Make sure to keep reading to find out some of the players I'll be watching closely tonight. 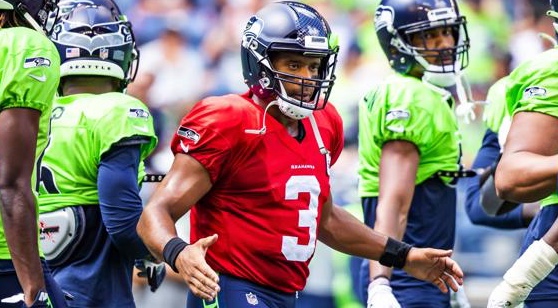 Seattle will look to turn their preseason around after dropping back-to-back exhibitions, allowing over 20 points in each. (AP)

A name I’m going to be looking out for on the Seahawks' side is rookie wide receiver D'Wayne Eskridge who will be getting his first NFL action in. While he’s been out of commission with a calf injury, beyond D.K. Metcalf and Tyler Lockett, there is plenty of room for the remaining wide receiver’s to really fight for some regular season playing time. It’s going to be interesting to see what teams he runs with and if he can add some much-needed speed when Wilson exits the game.

Someone who has impressed me on the Chargers side of the ball is Easton Stick. Chargers head coach Brandon Staley, a disciple of Rams' head coach Sean McVay, has followed the philosophy his former mentor did with the Rams, don’t play your stars in the preseason.

Because we are not seeing rookie of the year winner Justin Herbert, Stick has been good thus far. He’s completed 17-of-21 throws thus far with zero interceptions, not bad for a backup quarterback. Behind him, Chase Daniel has been as boring as ever, decent performance from a career backup. I think the depth beats out the Seahawks' flashy first-quarter starters.