The Pittsburgh Penguins (5-3-1) and New York Rangers (2-4-1) wrap up their two-game set at Madison Square Garden on Monday night.

The Rangers are looking to avenge a 5-4 setback in overtime. In fact, these teams have met three times already this season, with the Pens winning 4-3 in a shootout Jan. 22 in Pittsburgh, 3-2 in regulation on Jan. 24 in the Steel City and the 5-4 OT result Saturday.

The big news out of New York over the weekend is that the Rangers have placed defenseman Tony DeAngelo on waivers. He reportedly got into an altercation in the hallway to the room with goaltender Alexandar Georgiev, although that apparently was just the straw that broke the camels back. It sounds like this wasn't just the first issue the organization has had with the rearguard.

On the flip side, the Penguins lost veteran defenseman Kris Letang due to a lower-body injury early in the first period Saturday. His availability is uncertain. 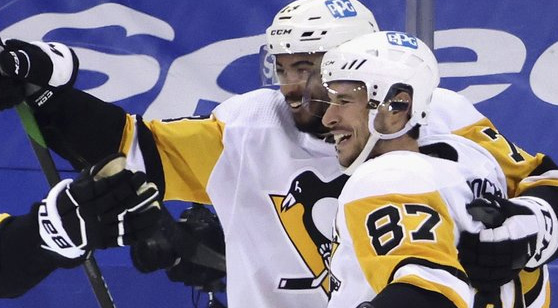 The Penguins have won all three of their meetings against the Rangers this season and the offense has scored 12 goals in the wins. (AP)

Head coach Mike Sullivan turned to Casey DeSmith in between the pipes for Saturday's game, and it was an up-and-down game, although in the end it worked out. DeSmith allowed four goals on 34 shots, but hung on for the win to run his record to 3-0-0.

It was an up and down affair, too. Jason Zucker broke the ice for the visitors at 7:39 of the first period with help from Pierre-Olivier Joseph and Kasperi Kapanen. The Rangers saw an answer just over six minutes later when Brendan Lemieux beat DeSmith for the first time. But Brandon Tanev got it back to 2-1 with help from Teddy Blueger and POJ. Joseph stepped up his game and saw a huge bump in responsibilities and ice time with Letang departing early.

Kevin Rooney scored on a shorthander, Chris Kreider had an even-strength goal, and star Artemi Panarin struck on the power play, sandwiching a goal by Kapanen for the Pens. The ice was suddenly tilted in favor of the Blueshirts after 40, but it wouldn't last.

The third period, and overtime, is when the stars took over. Jake Guentzel bagged his third of the season at 9:18 of the third, and that was the final score of regulation. The two sides would need overtime to decide it. And that's when Sidney Crosby would make his presence felt. He uncharacteristically had just two shots in the game, but that second shot was good for the GWG in OT.

DeAngelo was on the ice for four of the goals, so perhaps that's why he and Georgiev got into a heated exchange. Igor Shesterkin is likely to be patrolling the crease for Monday's affair.

Tristan Jarry is expected to get the nod. The bad news is that he is 2-3-1 with a 3.92 GAA and .859 SV% overall this season. The good news is that both of those wins are against the Rangers.

The Penguins have been so-so this season, and general manager Jim Rutherford resigned last week, muddling the short-term picture and stability of the organization just a bit. But they're 5-0 in the past five as a favorite, and 7-3 across the past 10 against teams with a losing record dating back to last season. In addition, the Pens have won six of the past eight against the Rangers, and 10 of the past 13 at MSG. The 'over' has also hit in five of the past six in New York, while going 18-5-3 in the past 26 meetings in this series.

The Rangers are skidding, winning just once in the past six on home ice, while losing each of their past four as an underdog. They're also just 1-5 in the previous six against teams with a winning overall record, too.

A big reason for New York's struggles have been due to their lack of consistency on special teams. They rank 21st in power play percentage at 14.7, and they're 24th on the penalty kill at 75.0 percent. The Rangers have posted just 2.8 goals per game to rank 21st in the NHL, too.

While the Pens have some injury issues, the Rangers are also a little nicked up. C Colin Blackwell (upper body) and D Jack Johnson (groin) are each considered questionable for Monday's tilt.