The Boston Bruins (7-1-2) and the Philadelphia Flyers (7-2-2) square off at Wells Fargo Center in Philadelphia on Friday night for the second end of a back-to-back set.

The Fly Guys are looking to bounce back and avenge a 4-3 loss in overtime on Wednesday night as the 'over' (5.5) easily connected. Patrice Bergeron notched the game-winning tally just 31 seconds into the extra session on the power play, beating Carter Hart.

It was a tough pill to swallow for Hart, who had a 3-1 lead midway through the third period. But some undisciplined play by the Flyers led to a pair of power-play goals by David Pastrnak in the final 7:55. Speaking of Pasta, he was able to post the hat trick, accounting for three of the team's four goals.

The B's have now won four of the past five meetings in this series, something the Flyers look to turn around in this one. 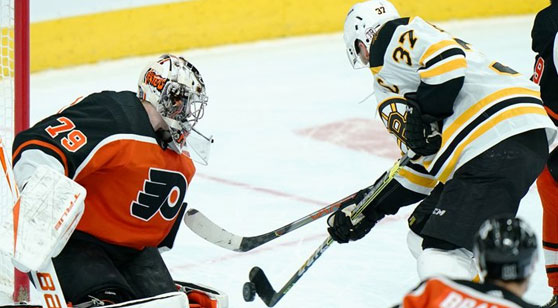 The Bruins squeezed past the Flyers in overtime on Wednesday night for their seventh win on the season. (AP)

Head coach Bruce Cassidy normally employs a goaltender rotation, and he sticks to it, but he announced earlier in the week that Tuukka Rask would start both Wednesday and Friday in Philly. It worked out on the front end, as Rask allowed three goals on 25 shots in the 4-3 OT win.

Rask is now 2-0-0 with a 3.37 goals-against average and .863 save percentage in two games this season against the Flyers, while he made 36 saves in a shutout in his only appearance against the Flyers in Philadelphia last March 10, the final game before the NHL pressed the pause button due to the global pandemic.

Brian Elliott might be tabbed for Friday's start, even though Hart didn't look bad on Wednesday, and the loss certainly wasn't his fault. Three straight power-play goals on bad penalties helped the B's turn a 3-1 deficit into a 4-3 win against Hart, who deserved better.

The Bruins have won back-to-back road games, and they are on a 5-0-1 run, with their lone setback during the span coming in a 4-3 overtime loss at Washington on Jan. 30. They have won all three games against the Flyers this season, outscoring them 15-8. However, that's a bit misleading, as one game was a 6-1 win on Jan. 23, with a 5-4 shootout win Jan. 21, and the OT win last time out.

Boston was blanked back on Jan. 18 in a 1-0 loss at N.Y. Islanders, but they have hit the 'over' in five of the past six games while averaging 4.6 goals per game during the span. They have also allowed 2.7 goals per outing during the stretch, which also includes a 3-0 'over' mark in three outings against the Flyers.

The Flyers have had a flare for the dramatic lately. They have played three consecutive overtime games heading into this one. Last time out was a 4-3 OT loss to the B's, with a 4-3 OT win against the Islanders on Jan. 31 behind Ellliott, and a 3-2 OT win on Jan. 30 behind Hart.

Philadelphia's offense has been improved and more consistent lately. Since that 6-1 setback in Boston on Jan. 23, the Flyers have scored three or more goals in five straight outings. Philadelphia is averaging 3.6 goals per game during the five-game span while allowing 2.6 goals per outing during the run.

The Flyers have been pretty good at home over the past two-plus seasons, going 28-11 in the past 39 home games. They're also a respectable 38-17 in the past 55 outings when playing on one day of rest.

As far as the total is concerned, Philadelphia has ripped off four 'over' results in the past five as an underdog, while hitting in five of the past seven games at home overall. And, for what it's worth, the over is 8-2-1 in their past 11 appearances on a Friday, if you enjoy that kind of randomness to feel better about your wagers.