Oddly enough, this is another division rivalry (like Nashville/Chicago) that has seen one side sweep the first six meetings of the year as well tonight. The Golden Knights are a perfect 6-0 SU (2-4 O/U) against San Jose this year, but have only covered the puck line once in the last five contests.

Similar to Chicago's position this evening though, San Jose' in a spot where I like the chances and the price out there to back them to get that first win over a rival, but I'm not entirely sure the complete trust is there. San Jose has struggled to keep the puck out of their own net as well, and the motivation is going to be questionable with them some nights with the season going nowhere.

Two power play goals by the same player cost the Sharks a win in regulation the other night and I think they scare that same result here. Six straight losses is a nice buy low spot for a team that's continually played the Knights to one-goal games all year long. If you've got the risk tolerance, the ML with San Jose is always an option too. 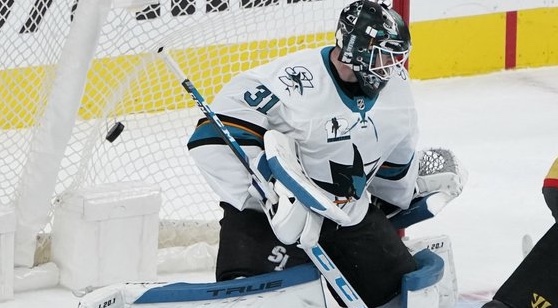 The San Jose Sharks have covered the puck line in four of their last five games against the Golden Knights. (AP)

San Jose is coming off a 2-3 loss to Vegas, currently on a six-game losing streak. Vegas has won seven straight game after beating San Jose.

Vegas has won five straight games when facing San Jose, although the Sharks have covered the puck line in three straight against the Golden Knights. The goal total has gone UNDER in three of the last four meetings.