The North Division finally gets its playoffs underway, and you can expect a high-scoring affair. We saw a total of 56 goals scored in the nine meetings, or roughly 6.2 goals per game.

The Jets and Oilers split the first four meetings this season, but Edmonton started to display their dominance as the campaign treaded on. The Oilers won the final six battles in this series, with three games won in Edmonton, and the most recent three won in Winnipeg. So the Oilers will enter with a ton of confidence against these Jets.

Edmonton swept a two-game set in Winnipeg by a combined score of 9-2 from April 26-28, and if you toss in a 3-0 win on April 17 at MTS, the Jets haven't offered much resistance against the Oilers recently. Mike Smith won two of those games in Winnipeg, with Mikko Koskinen in the crease for the other.

Connor Hellebuyck was sharp in the crease for the Jets this season, going 24-17-3 with a 2.57 goals-against average and .916 save percentage, but he was just 2-5-0 with a 3.96 GAA and .877 SV% in seven starts against Edmonton. Hellebuyck's next-worst GAA was 2.80 in eight starts and nine appearances against the Toronto Maple Leafs, so the Jets tendy really struggled against the likes of Connor McDavid, Leon Draisaitl and company. 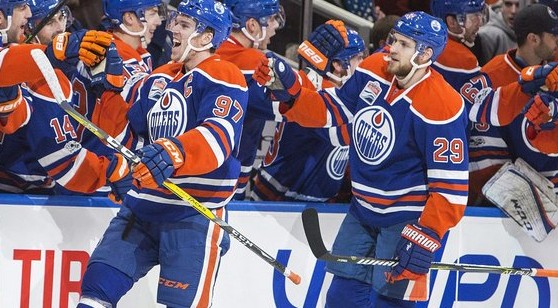 The Edmonton Oilers have won eight straight games after losing the game prior, and are favorites for Game 1. (AP)

McDavid's most recent hat trick came in Winnipeg on April 26, and he has three goals and nine points across his past three meetings with the Jets, or yes, and average of 3.0 points per game. He had seven goals and 22 points with a plus-15 rating in his nine games against the Jets, and he had at least two points in every game. That's important for OVER bettors, especially. The Jets just had no answered for him.

The OVER ended up cashing in each of the first three meetings in this season series, before the UNDER ended up 4-1-1 in the final six battles despite McDavid's heroics. That's mainly because Edmonton's goaltending was so outstanding, however.