The Florida Panthers will look to even the series with their in-state rival on Saturday afternoon. Florida won a 6-5 thriller over the Tampa Bay Lightning on Thursday night to stave off a potential elimination game.

A win in Game 4 would give them a home-ice advantage when the series returns to south Florida for Game 5, but it won’t be easy to beat the Lightning in Tampa Bay again. The Lightning were 21-6-1 at home during the regular season.

The Lightning will take a commanding 3-1 series lead over the Panthers with a convincing win on Saturday afternoon. Nikita Kucherov will find the back of the net at least once as Tampa Bay continues to pick apart Florida’s defense. 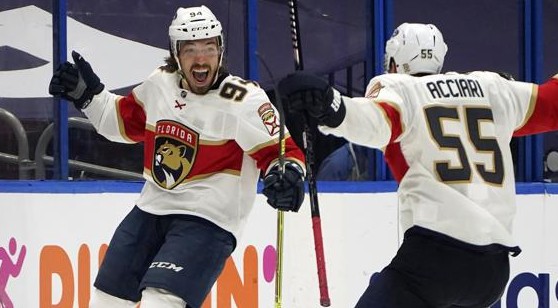 The Florida Panthers have covered the puck line in four of their last five games when facing the Tampa Bay Lightning. (AP)

We have already seen two high-scoring games in this series. There was a total of nine goals in Game 1 as every period had multiple goals. Neither team had more than a one-goal lead as Tampa Bay and Florida continued to trade punches, but the Lightning eventually came out on top as Nikita Kucherov and Brayden Point each had two goals.

Game 3 on Thursday night was even wilder. Florida got out to a 2-0 lead in the first period as Jonathan Huberdeau continued to set up his teammates with great looks. However, Tampa Bay potted five goals from five different players in the second period to take the lead. The Lightning were unable to hang on though as Patric Hornqvist notched a goal and an assist in the final frame before Ryan Lomberg won it for the Panthers in overtime.

The big story entering Game 4 is the status of Florida defenseman Keith Yandle. Yandle was scratched for the first time in 12 years for Game 3, and he saw his streak of 979 consecutive games played come to an end. He was just two games shy of tying the all-time record, so it was tough to see him benched, but he was a major liability in the first two games of this series.

Sergei Bobrovsky started Game 3 on the bench, but he replaced Chris Driedger after Tampa Bay poured in the goals during the second period. Bobrovsky seems likely to get the start over Driedger in Game 4, yet there will be a quick hook if he continues to struggle.

Florida’s goaltenders have combined to post a 4.33 GAA and a .879 save percentage through the first three games, so that must change if the Panthers are going to win their first playoff series in 25 years. Three-time All-Star and 2019 Vezina Trophy winner Andrei Vasilevskiy hasn’t been at his best either. Vasilevskiy was incredible in the regular season, and he will be a Vezina Trophy finalist this summer. He posted a 31- 10-1 record with a 2.21 GAA and a .925 save percentage this year.

However, Vasilevskiy is allowing 3.56 GAA with a .908 save percentage through the first three games. The return of Nikita Kucherov for the postseason has ruffled a lot of feathers around the NHL. Kucherov didn’t play at all during the regular season after undergoing offseason surgery, and that allowed the Lightning to add other players and stay under the cap. The cap is no longer in place during the playoffs, so Kucherov has been able to suit up with everyone else and has notched two goals and three assists in three games.

Tampa Bay’s other producers have stepped up in a big way too. Victor Hedman leads the team with six points (five being power-play assists) and is playing great defense, while Point has three goals and two assists. Steven Stamkos has notched two goals and two assists too, but Ondrej Palat has not been as sharp as he was in the regular season.