The Golden Knights opened this series laying an egg in Game 1, falling 1-0 in overtime against Cam Talbot. The offense was unable to get on the board, but all that stopped in Game 2. They bounced back 3-1 on home ice, and then went to the Twin Cities and picked up a 5-2 win in Game 3, and a 4-0 victory in Game 4. Now, the Wild is one of three teams on the brink of elimination Monday evening. 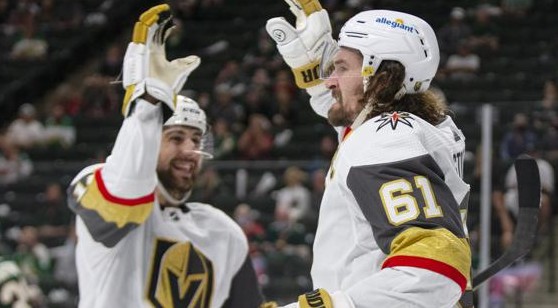 The Vegas Golden Knights have won three straight games against the Minnesota Wild, outscoring them 9-2 over the last two games. (AP)

Marc-Andre Fleury kicked aside all 35 shots he faced in Game 4, posting his 16th career shutout in the playoffs. He pulled into a tie with Curtis Joseph for the third-most playoff shutouts in NHL history, and he trails just Patrick Roy and Martin Brodeur. The way the Wild have been scoring lately, it wouldn't be surprising to see Fleury add to that number in Game 5.

Cam Talbot matched Fleury shot for shot in Game 1, but he has allowed three or more goals in each of the past three outings. The Wild won five of the final six regular-season meetings between these teams, but Minnesota hasn't looked ready for the playoffs, while Vegas has been on fire and look more battle tested.