The New York Islanders sent the rival Pittsburgh Penguins to the golf course in a thrilling six-game series win, with all of the games very entertaining. The Boston Bruins polished off the Washington Capitals in five games, and look to be poised for another deep run into the postseason.

The Islanders actually won the first five regular-season meetings in this series, before the Bruins won the final three battles. That includes a 3-2 overtime victory at TD Garden on May 10. Four of the eight games in the regular season were one-goal games, however.

Isles bench boss Barry Trotz used rookie Ilya Sorokin in Game 1, with Semyon Varlamov not quite 100 percent healthy after a late-season lower-body injury. Varlamov was able to play in Game 2, but didn't cut the mustard in a loss to the Pens. He also lost Game 3, so Trotz went back to Sorokin for a jump start. The rookie won Games 4 through 6 in the blue ice, leading the Isles to the series victory. It's now the rook's job to lose.

The B's have had no such issues in the crease. Tuukka Rask is the guy, even as their star rookie Jeremy Swayman appears to be the heir apparent. He lost Game 1 in Washington, a 3-2 overtime setback, but he rattled off four straight wins, allowing two total goals in Games 4 and 5. The UNDER cashed in each of the final three games of the Caps series as a result. 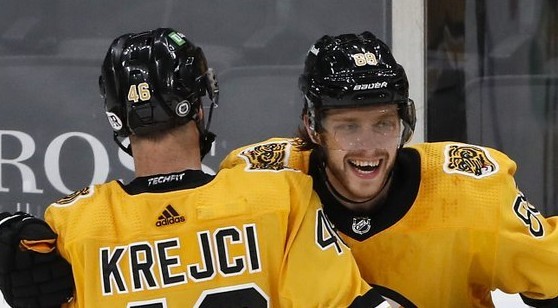 The goal total ha failed to go OVER in four of the last five meetings between the Boston Bruins and New York Islanders. (AP)

The Islanders are a little bit of a question mark in this one, as the rookie Sorokin was a perfect 4-for-4 in his starts in the Pittsburgh series, but the intensity gets ratcheted up that much more as the postseason treads on. How will he handle the brighter lights and more pressure in the second round? Personally, I'd rather trust the tried and true veteran Rask with my money, especially in Game 1 in Boston's home barn.

In addition, New York has won just twice in the past eight visits to TD Garden, while cashing in just 17 of the past 52 meetings overall. The home team is 7-1 in the past eight meetings, so look for the B's to take Game 1.

The best bet on the board might be the OVER. Yes, the UNDER is 11-4-4 in the past 19 meetings between these teams, including 6-1-2 in the past nine in Boston. However, the Islanders offense came alive with 21 total goals in their six-game series win, or 3.5 goals per game. The Bruins scored three or more goals in each of their past four outings against the Caps, also averaging 3.5 goals per game during the span.