The Golden Knights were able to survive and advance against the Minnesota Wild in the first round, edging the underdogs in a decisive Game 7. VGK fired out to a 3-1 series lead, but stumbled in Games 5 and 6 before recovering in the nick of time on Friday night at T-Mobile Arena in a 6-2 blowout.

The Avalanche swept the St. Louis Blues, outscoring the opponent by a 20-7 margin while averaging 5.0 goals per game. They have been sitting around since last Sunday, waiting to the VGK-Wild series to wrap up.

The last time these teams met in Denver it was a 3-2 overtime win for the Golden Knights, as Philipp Grubauer outplayed Marc-Andre Fleury ever so slightly. In the front end of the double dip, it was Colorado blowing out Vegas 5-1. The regular-season series was even Steven, splitting the eight games 4-4, with both teams winning on the road in two of the four away outings.

The 36-year-old Fleury showed some chinks in the armor in Games 5 and 6 against the Wild, and some talking heads even suggested perhaps a goaltender change for the pivotal Game 7. Head coach Peter DeBoer stuck with the potential Hall of Fame backstop, and he helped VGK advance. 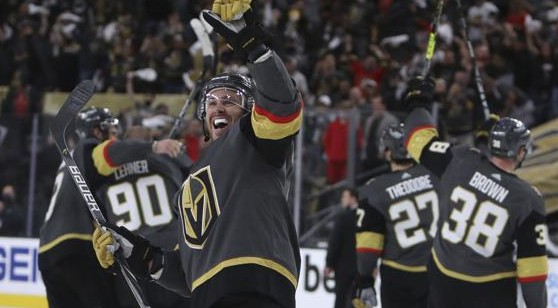 The Vegas Golden Knights have covered the puck line in three straight games when facing the Colorado Avalanche. (AP)

The good news is that the Golden Knights have rattled off wins in four of their past five road games, although that one loss was in Game 6 in St. Paul against the Wild in their most recent away game. They're also just 2-5 in the past seven as a playoff underdog, and they're decisive underdogs in this road trip to the Mile High City. The good news here is that the underdog has connected in nine of the past 13 meetings between these sides.

The Avalanche have rattled off wins in 39 of the past 52 games as a favorite, which is a .750 win percentage. The Avs are also 4-1 in their past five when working on three or more days of rest, so if you're concerned about rust since they last played a week ago...don't be.

Colorado has also cashed in 37 of the past 52 as a home favorite, while going 20-8 in the previous 28 as a favorite in the playoffs. That includes all four of their first-round games against St. Louis. The Avs also went 4-0 on the puck line against the Blues, and they have won nine straight since May 7 in the regular season, with six straight victories by three or more goals.