The Carolina Hurricanes are on the brink of elimination. Carolina was the best team in the Central Division during the regular season, but Tampa Bay became one of the Stanley Cup favorites after the return of Nikita Kucherov.

The Lightning hold a 3-1 lead over the Hurricanes in this series, and they need just one more win to advance to the Stanley Cup semifinals. The Hurricanes need to win at home on Tuesday night to force a Game 6 in Tampa on Thursday.

The Hurricanes won’t be nearly as mistake-prone on Tuesday night in their own arena. Nedeljkovic will be stellar in net, and Jordan Staal will make his presence felt in a Carolina win. 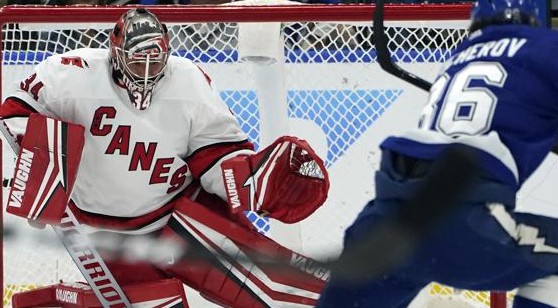 The goal total has gone UNDER in four of the last five games played between Tampa Bay Lightning and Carolina Hurricanes. (AP)

Rod Brind’Amour is probably wishing that he didn’t start Petr Mrazek in goal for Game 4. Mrazek got the nod over rookie Alex Nedeljkovic after the Hurricanes won Game 3 with the veteran in the net. Although Mrazek had a couple of shaky moments between the pipes in the victory, Brind’Amour went with the experience on Saturday, and it cost Carolina in a big way.

The Lightning hounded Mrazek, pouring in the goals to pick up a 6-4 win over the Hurricanes. Carolina scored four goals in a span of eight minutes and 11 seconds in the second period, but the Lightning scored three goals in five minutes to retake the lead by the end of the period.

Mrazek wasn’t at fault for all the goals. Three of Tampa Bay’s six goals came on the power play after all, but he didn’t look comfortable in the net either. That was showcased on the last goal he allowed. Mrazek exposed too much of his five-hole while going side to side, allowing Nikita Kucherov way too much room to find the back of the net. Tampa Bay ended up scoring six times on just 26 shots in Game 4.

Nedeljkovic hasn’t been bad this series. He was the losing goalie in the first two games against the Lightning, but he allowed just two goals in each game. The rookie was the No. 1 goaltender at the end of the regular season, and he has played better than most of his colleagues in the playoffs. Nedeljkovic is allowing 2.18 GAA with a .920 save percentage.

Penalties were the other big thing that hurt Carolina in Game 4. The Hurricanes committed seven penalties in the first and second periods, and six of those penalties happened in 28 minutes of gameplay. That exhausted the defense, leading to Tampa Bay’s potent power play being even more difficult to stop on Saturday.

<p. Tampa Bay’s biggest stars shined with Nikita Kucherov and Steven Stamkos each tallying two goals and an assist. Kucherov has been red hot in the playoffs despite not playing a game in the regular season with five goals and 12 assists in 10 games. He has four goals and eight assists on the power play, helping make the Lightning the best power play in the playoffs.

The Lightning are now scoring on 41.2% of their chances with an extra man. They trailed Colorado going into Saturday’s game, but their dominance coupled with the ineffectiveness of the Avalanche over their last two games has led to the Lightning leading the NHL in this metric.

In this series, the Lightning have scored half their 12 goals on the power play. This unit is fearsome with four forwards as Kucherov and Stamkos are on the ice with Brayden Point and Alex Killorn. Victor Hedman is the lone defenseman on the top power-play unit, but he is arguably the key to it all with nine assists on Tampa Bay’s 14 power-play goals this postseason.