The Tampa Bay Lightning are looking to become the second franchise to repeat as Stanley Cup champions in the 21st Century. Pittsburgh won back-to-back championships in 2016 and 2017, and Tampa Bay has a great chance to repeat under Jon Cooper.

The Lightning are sizable favorites to beat the New York Islanders and advance to the Stanley Cup Finals, where they will either face the Vegas Golden Knights or the Montreal Canadiens. 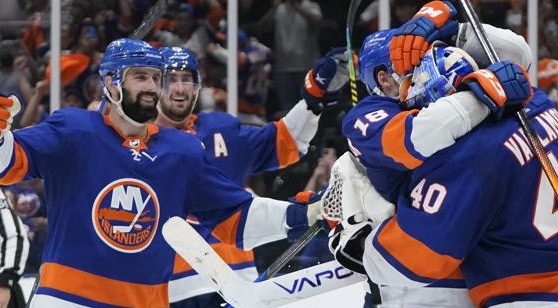 The New York Islanders have covered the puck line in nine of their last 10 games when playing as underdogs. (AP)

This will be the first meeting between teams from two different divisions this season because of measures the NHL implemented to prevent the transmission of COVID-19. The Islanders and Lightning have some familiarity with each other though after meeting in last year’s Eastern Conference Finals.

Tampa Bay jumped on New York from the outset of that series. The Lightning beat the Islanders 8-2 in Game 1, running starting goaltender Thomas Greiss midway through the first period. Semyon Varlamov didn’t fare much better, but he did end up playing the rest of the series for the Isles.

The Islanders became much more competitive with Varlamov in net. Three of the next five games in the series were decided by a final score of 2-1, and Varlamov was progressively better in each game. With the Islanders down 3-1 in the series, he saved 82 of 85 shots in the last two games before the Lightning beat the Isles in overtime of Game 6 to advance to the Stanley Cup Finals.

Varlamov was not great against Pittsburgh in the first round, but he saved the day for the Islanders against the Boston Bruins last round. He had a .934 save percentage in that series and allowed 12 goals in his five starts. Varlamov saw at least 40 shots in three of his five starts against the Bruins, showcasing how often he was under fire.

The Lightning have a lot more talent on offense than the Bruins did though. Tampa Bay has the best power play unit in the postseason, and this team’s forwards are the envy of most teams in the NHL.

Nikita Kucherov has shown no signs of rust after missing the entire regular season. Kucherov hit the ground running once he returned for the postseason with a team-high 18 points (five goals, 13 assists) through 11 games. He has four goals and nine assists on the power play, and his presence is a big part of why the Lightning are converting on a whopping 41.7% of their power play opportunities.

We’ve seen Steven Stamkos play well too now that the oft-injured center is finally healthy. Stamkos has five goals and eight assists this postseason, and he only trails Kucherov in points on the team. Tampa Bay has been limiting his ice time in an effort to keep him available though, so he didn’t play more than 16 minutes in any game that didn’t go to overtime.