The Lightning went 0-2-2 in a four-game streak from April 2-8 before taking out their aggression on the Buffalo Sabres on Sunday, winning 5-0. After allowing 15 total goals in a three-game span from April 2-6, the Lightning have appeared to solve its defense and goaltending issues with just two total goals allowed in the past two outings.

The Stars are looking for revenge after a 3-1 win by the Lightning Jan. 15 at Amalie Arena in Tampa. Dallas is coming off a 6-4 win in Chicago last time out on Sunday, snapping a two-game mini skid. Dallas needs to keep winning, as it has 86 points, two points ahead of the Vegas Golden Knights for the final playoff spot in the Western Conference. Dallas is tied with the Los Angeles Kings with 86 points, too, and it's one point behind the Nashville Predators, too.

Betting On The NHL

Where to bet on the NHL:

The Lightning are currently third in the Atlantic Division with 96 points through 72 games, four points behind the Toronto Maple Leafs for second, and one point ahead of the Boston Bruins. So this is a hugely important road contest, as all of the games are from this point forward.

Like Tampa, Dallas has had issues defensively and in between the pipes. The Stars have allowed a total of 11 goals across the past three games, and three or more goals in seven of the past 11 outings dating back to March 22. Not good. 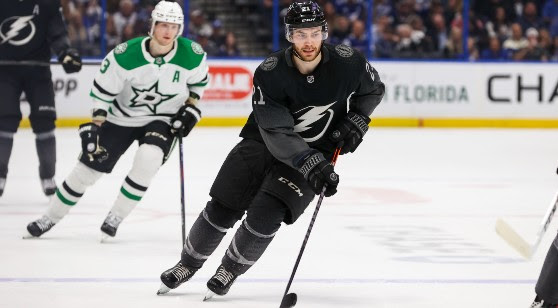 The Lightning are just 1-9 in the past 10 vs. teams with a winning overall record. (Getty)

The Lightning have really struggled recently against the good teams, and pretty much everyone lately. But you can expect the experienced, two-time defending champs will smooth things out. They'll likely find success against the Stars, a team which has won just once in the past seven tries at home against the Lightning.

Believe in the Lightning, who have managed to win four of the past five against the Central Division. The Stars have had issues on the back end lately, and facing Andrei Vasilevskiy isn't great for their offensive outlook. Look for TBL to scratch out a lower-scoring win on the road.