Coming into this Matchday 27 game Jose Guardiola’s Manchester City club are placed in 1st position having won 65 points from their 26 games played while Ole Gunnar Solskjaer’s Manchester United team have earned a total of 51 points placing them in 2nd position on the table.

With 27 games matches played in the season, the clubs are separated on the table by 1 place and 14 points.

In their previous match, Manchester City had a win against Wolverhampton Wanderers and have now won 15 points from their last five contests, with a run of W,W,W,W,W.

Their opponents Manchester United faced Crystal Palace in their last match and had a draw giving them a total of 9 points in their last five matches and owners of a form run of D,D,D,W,W.

In their last five matches at Etihad Stadium, Manchester City have earned a total of 15 points.

Visitors Manchester United have now won 7 points from their last five matches away from home.

Manchester City and Manchester United have played a total of 50 times previously.

The hosts Manchester City have won 19 of those previous 50 matches, while visitors Manchester United have won 23 times.Games between the two clubs have ended drawn 8 times.

When the referee blew fulltime, the score was 4-1. Against Wolverhampton Wanderers, Manchester City claimed 73% of ball possession.

Many punters rely on shots on goal data for a given team. In their last game, Manchester City had 22 shots in attack and 6 shots conceded.Meanwhile, Manchester United drew their last match.

Ole Gunnar Solskjaer's men were up against Crystal Palace. At the final wistle, the score board showed 0-0.

In their match against Crystal Palace, Manchester United claimed 62% of the ball.

Often punters look to shots on goal as a true guide of how a team performed. For Manchester United, a total of 11 shots were taken in attack with 8 shots conceded in the last game.

To no surprise, the Citizens have been installed as heavy favorites over the Red Devils for this Manchester Derby at BetMGM. 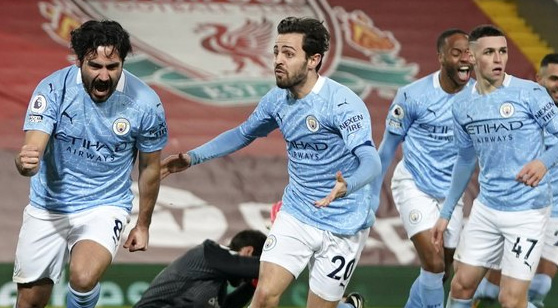 Manchester City has been a beast at home this season going 11-2-1 while outscoring opponents 31-9 over this span. (AP)

Knowing Manchester City hasn’t lost a Premier League game since late November, it’s hard to make a case for the visitor to capture three points here but United has proven to play tough against their rivals recently.

While City’s 21-game winning streak is ridiculous, the club from Old Trafford hasn’t lost a game in its last 10 of all competitions.

However, United hasn’t scored a goal in three consecutive games -- all of them ending in scoreless draws. In 14 road league games, United hasn’t dropped points but it almost has as many draws (6) as victories (8).

I believe United will get on the board but ultimately, City’s time of possession and ability to create opportunities will be the difference between these squads on Sunday.

Both clubs will get on the board but the Citizens will do more damage in the final derby of the season.

Markets available at BetMGM-Subject to Change