This is a top-two clash in the Bundesliga. Leipzig are four points behind Bayern with eight games to go.

A win for the visitors would pretty much wrap up the title, and even though Bayern have a crucial Champions League tie against PSG in midweek, they look value at odds-against to win here.

The Bavarians came on strong in last year’s title race, and after dropping some silly points against Frankfurt and Bielefeld a month ago, they have won their last four games, scoring 16 in the process.

One of those wins was 4-2 from behind against Dortmund, a typical display of quality and resilience.

Leipzig have been formidable at home this year, but it is not often that Bayern can be backed at a price as big as 11/8, and it looks too good to turn down. 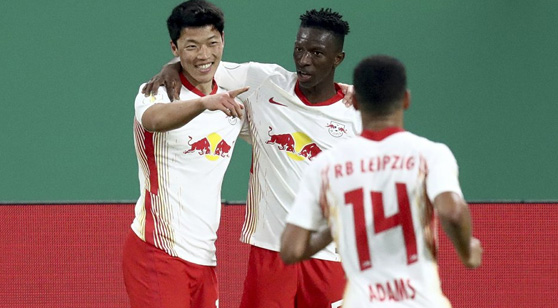 RB Leipzig has been very strong at home, going 10-2-1 in league play and only allowing 10 goals. (AP)

Heading into Matchday 27 RB Leipzig and Julian Nagelsmann sit in 2nd position on the league table with 57 points won from their 26 games played while Bayern Munich and Hans-Dieter Flick have won 61 points and placed 1st on the table.

After 26 matches played so far this league season, these two squads are separated on the table by 1 place and a total of 4 points.

ESPN+ subscribers can watch RB Leipzig vs Bayern Munich on Saturday plus plenty of other Matchday 27 action in the Bundesliga.

RB Leipzig have now seen a form run of W,D,L,W,W and have earned a total of 10 points in their last five matches taking a win against Arminia Bielefeld in their previous match.

Their opponents Bayern Munich took a win against VfB Stuttgart in their previous match and now own a run of form of W,W,W,W,W and 15 points in their last five matches.

In their last five matches played at their Red Bull Arena Leipzig, the hosts RB Leipzig have now won a total of 10 points.

Visitors Bayern Munich have now won 12 points from their last five matches away from home.

Previously RB Leipzig and Bayern Munich have met for a total of 11 matches.

The hosts RB Leipzig have won 1 of those previous 11 matches, while visitors Bayern Munich have won 6 times.

Games between the two clubs have ended drawn 4 times.

In terms of shots on goal, RB Leipzig struck a total of 17 shots in attack while in defence conceding 6 shots.

As far as the betting odds go, the bookmakers' favourite is Bayern Munich.