The Hawkeyes received a very stern test at home against Maryland last time out Monday, scraping by the Terrapins 80-75 as 9.5-point favorites as the OVER connected. The good news is that the Hawkeyes turned it over just seven times, but Iowa managed to hit 12-of-19 from the free-throw line, good for just 63%, and it allowed Maryland to come in and outrebound them 36-32. However, the Hawkeyes were a solid 49% from the field, with star Keegan Murray leading the way with a 14-of-21 shooting night, racking up 35 points, eight rebounds and three blocked shots, and he also dropped in five triples. The Badgers will obviously need to account for him on every possession.

HC Greg Gard's group is flying high after upsetting Purdue in their place on Monday by a 74-69 score as 13-point underdogs as the OVER cashed. The Badgers didn't necessarily shoot lights out, hitting just 44%, or 27-of-61 from the field, while knocking down just 6-of-24, or 25%, from behind the arc. However, the Badgers also were very disciplined, they rebounded the ball well with 32 boards while taking care of the ball, committing just seven turnovers. Wisconsin also employed some good defensive pressure, as the Boilermakers hit just 41% from the floor, hitting 23-of-56. And Purdue was its own worst enemy at the stripe, hitting just 62%, or 15-of-24 from the free-throw line, while committing 12 turnovers.

Iowa's non-cover against Maryland on Monday snapped a 3-0 ATS run. The Hawkeyes find themselves in a strange spot, as they're underdogs for just the third time this season. However, that's quite all right with Iowa, as they're 2-0 ATS as an underdog, while winning one of the games straight up at Virginia on Nov. 29. In the other game, Iowa lost at Purdue on Dec. 3, but easily covering a 14.5-point number in a 77-70 loss as the UNDER cashed.

For totals, the trends are a bit contradictory. The OVER is 12-3-1 in the past 16 games overall for the Hawkeyes. However, the UNDER is 9-1 in the past 10 games on the road, while going 7-1 in the past eight against teams with an overall winning record, and 6-1 in the past seven as an underdog.

Wisconsin is back on the Kohl Center floor, and the last time it faced a Big Ten foe in Madison the Badgers were able to grab the cover. That was a 64-59 win and narrow cover as 4.5-point favorites over Indiana back on Dec. 8. The previous two home appearances were narrow wins over non-conference foes Nicholls and Illinois State. The Badgers were favored by 17 in each of the games, but won by an average of 3.5 PPG in the two outings. Is there trouble in Madison? Well, the upset at Purdue last time indicates no, absolutely not. 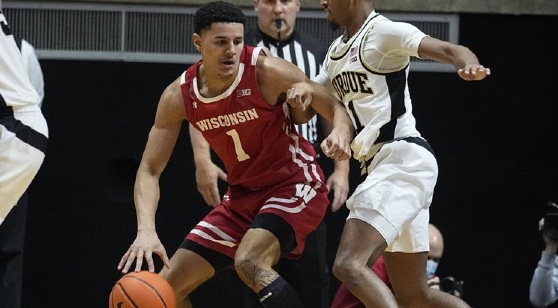 Wisconsin has cashed in four of the past five games at Kohl Center in Madison. (AP)

This is going to be an interesting game. While Wisconsin has been scoring the basketball with aplomb lately, that's not their style. They're more of a slower tempo team, while Iowa will be looking to run early and often. The Hawkeyes can score with the best of them, and you know their star Murray can certainly carry them when he is hot. But he'll need help, and Wisconsin's suffocating defense can make even the best players look mortal.

I like what I saw from the Badgers, but it's often difficult for a team to bring tremendous intensity for 40 minutes in back-to-back games. The good news is that they get the Hawkeyes in Madison. If this game were in Iowa City, I'd take the Hawkeyes, and I wouldn't think twice about it. But Wisconsin is tough at home, and they seem to rise to the occasion and play to the level of its competition. In this case, they'll play well, because Iowa is a solid opponent. This is going to be an entertaining and close game, coming down to free throws in the end.