The Ohio State Buckeyes (9-2, 3-0 Big Ten) travel to meet the Indiana Hoosiers (10-3, 1-2) for a conference battle Thursday at the Simon Skjodt Assembly Hall in Bloomington, Ind. Tip-off is scheduled for 7:00 p.m. ET, and the game can be viewed FOX Sports 1.

The Buckeyes were lucky to escape Lincoln with a win on Sunday, topping the Nebraska Cornhuskers by an 87-79 count in overtime. Superstar F E.J. Liddell had a brutal night, hitting just 2-of-14 from the field, finishing with 10 points, eight rebounds, five assists and three blocked shots. But

Malaki Branham ended up with a career-high 35 points, hitting 13-of-19 from the field, including 6-of-10 from behind the 3-point line. He also added six rebounds and two assists. Zed Key chipped in with 14 rebounds and a blocked shot, while Jamari Wheeler was good for 16 points, seven rebounds and two assists, while dropping in four triples. It was a tremendous effort by the supporting cast with Liddell misfiring all evening long.

The Hoosiers head home looking to put a trip to Penn State in the rear-view mirror. Indiana lost 61-58 to the lowly Nittany Lions, hitting just 40%, or 23-of-58, while ending up 24%, or 4-of-17, from behind the 3-point line. The good news is that IU turned it over just six times, but they were outrebounded 37 to 28. Trayce Jackson-Davis was the only player in double digits for points, carrying the mail himself with 20 points, five rebounds, three assists, two blocked shots and a steal. The next best contributor was Race Thompson, who just missed a double-double with nine points and 10 boards. They're going to need more contributions from the supporting cast if they're to take down the Buckeyes.

As mentioned, the Buckeyes were lucky to escape Nebrasketball with an OT victory, but Ohio State nearly pulled off the cover as 9.5-point favorites. It won by eight, and nearly had the miracle cover in the extra session. They're just 1-2 ATS across the past three outings, but the Buckeyes are 5-4 ATS across the past nine. In true road games so far, Ohio State has won each of its two league games on the road, while going 1-1 ATS with a pair of OVERs. The average margin of victory on the road so far in conference play is 10.0 PPG in two Big Ten games. The Buckeyes are 11-4 ATS in the past 15 games on the road.

As far as totals, OVER bettors have been very fond of Ohio State so far. The Buckeyes needed to go to overtime to secure the OVER in Nebraska, as it was tied 72-72 after regulation on a total of 148.5. Total bettors don't care how it's done, however, as long as it gets across the finish line. The OVER is 3-1 in the past four games overall, and 8-2 across the past 10 contests overall. The OVER is 19-7 in the past 26 games on the road, while going 21-7 in the past 28 road outings against teams with a winning home record.

These teams met once last season in Columbus, with the Buckeyes picking up a 78-59 victory as seven-point favorites as the total actually pushed at most shops. Ohio State has dominated the series lately, winning five of the past six straight up while going 4-1 ATS in the past five overall. Indiana covered and won in the most recent meeting in Bloomington on Jan. 11, 2020, and the Buckeyes are just 1-3 ATS in the past four trips to Indiana.

The Hoosiers posted a 79-61 win over the Northern Kentucky Norse last time it played at home on Dec. 22. Indiana has covered six consecutive games at home, including its only previous conference game on its home hardwood back on Dec. 4, a 68-55 win over Nebraska as 11.5-point favorites. The UNDER connected that day against the Cornhuskers.

Indiana failed to cover last time out in the loss at Penn State, but they haven't had non-covers in consecutive games since closing out last season with an 0-6 ATS skid from Feb. 20-March 11. The Hoosiers are 7-3 ATS in the past 10 games overall, while going 4-0 ATS in the previous four non-covers. 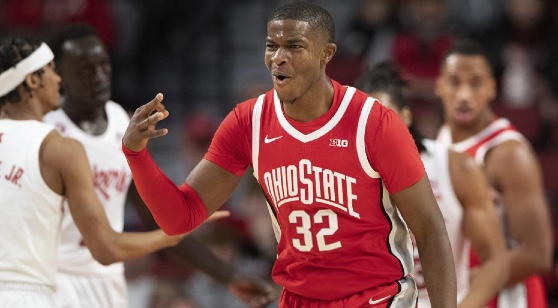 Indiana had just one scorer in double digits at Penn State. This team is averaging 76.0 PPG, and they have three scorers averaging 10.0 PPG or better. They need Xavier Johnson to step up and be more of a solid tertiary scoring option to TJD and Thompson. Johnson does lead the team with 4.2 APG. Indiana has a pair of players with legitimate injuries in C Logan Duncomb (leg) and G Trey Galloway (wrist). Each are depth players. Galloway is expected to be ready, and he can be a helpful option to provide the starters a breather.

Indiana hasn't fared well in recent seasons against Ohio State, but the Buckeyes haven't been nearly as dominant at home. They escaped defeat in Nebraska, but won't be able to get out of Bloomington with a 4-0 conference record.