The New Orleans Saints (8-8) travel to meet the Atlanta Falcons (7-9) for a Week 18 matchup Sunday at Mercedes-Benz Stadium in Atlanta. Kickoff is scheduled for 4:25 p.m. ET, and the game can be viewed on FOX.

The Saints are still alive for a possible postseason spot, and it could come down to New Orleans and the San Francisco 49ers battling it out for the final NFC wild-card berth. The only way New Orleans can make the postseason is with a win, first and foremost, while also needing the San Francisco 49ers to lose to the Los Angeles Rams. Both of those scenarios are certainly possible, and that would set up a wild-card trip for the Saints to play the Rams at SoFi Stadium next weekend. But, first things first.

The last time these teams played back in Week 9, the Falcons came away with a 27-25 victory as seven-point underdogs, so the Saints will certainly not be taking them lightly in Atlanta despite the fact the Falcons have been eliminated from postseason contention. Atlanta would love to serve their rivals a devastating loss and a trip to the couch for the playoffs, though. I can guarantee that.

The Saints swept the season series last year under future Hall of Famer QB Drew Brees, winning 21-16 in Atlanta on Dec. 6, 2020. The Saints are 3-1 SU/ATS in the previous four meetings, and 6-2 ATS across the past eight in this series. The UNDER has hit in five of the past six meetings overall.

The Saints have actually been better against the number on the road, going 5-3 ATS, then at home, where they're just 3-5 ATS. And, again, that includes the first meeting with the Falcons on Nov. 7, a two-point loss as touchdown favorites.

New Orleans has won three of the past four games, while also going 3-1 ATS. That including a stunning 9-0 win at Tampa Bay against the defending Super Bowl champs. The defense has come alive again after some shabby performances in the middle of the season. The Saints have yielded 10, 20, 0 and 9 across the past four outings, or an average of just 9.8 PPG. The offense has posted 18, 3 and 9 across the past three outings, or just 10.0 PPG, so it comes as no surprise that the UNDER is on a 6-0 run for the Saints.

The Falcons are simply playing for pride, but pride can be a powerful thing. Atlanta has been looking at rather long odds to make the playoffs, but they have posted a rather respectable 3-3 SU/2-3-1 ATS mark across the past six games before finally being eliminated from the postseason hunt last week with a loss in Buffalo. But this is a dangerous team which continues to give its all down the stretch, especially tackle machine LB Foyesade Oluokun, who might be the biggest Pro Bowl snub of the season. Google him.

For the totals, the UNDER has hit in seven of the past eight games for the Falcons, while cashing in four straight at home. The UNDER is also 5-1 in the previous six games as a 'dog, while going 8-2 in the past 10 as a home 'dog. The only trend going in the opposite direction is for the Falcons inside the division, cashing in five of the past seven. 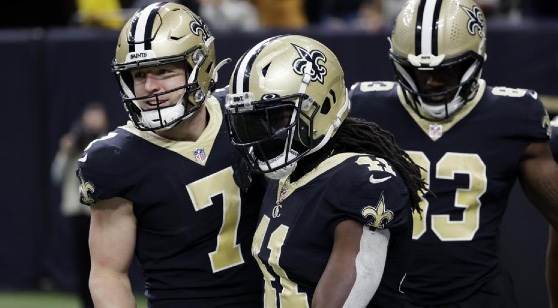 The playoff-hopeful Saints are 5-1 ATS across the past six trips to Atlanta. (AP)

INSIDE THE STATS - NEW ORLEANS SAINTS

INSIDE THE STATS - ATLANTA FALCONS

The Saints have plenty left to play for, and they won't know the result of the 49ers-Rams due to an identical kickoff time. So they'll be throwing everything and the kitchen sink at the Falcons, trying to scratch their way into the playoffs. Atlanta, however, has nothing on the line but pride, and the potential satisfaction of spoiling the season of its rival.

You can expect plenty of defense in this one. Both the Falcons and Saints have been playing great D lately, and ticking off plenty of UNDER results. THE UNDER has hit in six straight for the Saints, while hitting in eight of the past 10 divisional games, while the Falcons have hit the UNDER in seven of the past eight. That's your best bet in this one, as is playing the Saints, either on the money line in a parlay, or laying the points. New Orleans in a three- or four-team teaser might be quite attractive, too, especially mixed in with other teams fighting for seeding and/or playoff spots.