The Purdue Boilermakers (15-2, 4-2) and Indiana Hoosiers (13-4, 4-3) square off in a Big Ten conference battle Thursday night at the Simon Skjodt Assembly Hall in Bloomington, Ind. Tip-off is scheduled for 7:00 p.m. ET, and the game can be viewed on FOX Sports 1.

The Boilermakers and Hoosiers battle in the hardwood version of the battle for the Old Oaken Bucket. These rivals meet for the first time since March 6, 2021, a 67-58 win in West Lafayette. The Boilermakers swept last season's series, and it has won nine straight meetings while covering four in a row in the series.

Purdue is coming off an impressive 96-88 overtime victory at Illinois on Monday night as a 1.5-point underdog as the OVER connected. The Boilermakers are averaging 94.0 PPG across the past two wins over the Illini and Nebraska Cornhuskers, which is nearly four buckets than the team's season average of 86.2 PPG. Purdue has won three consecutive games since a five-point setback against Wisconsin, and the Boilermakers have covered back-to-back games for the first time since a 5-0 ATS run from Nov. 16-30.

Indiana bounced back from an 83-74 loss at Iowa with a 78-71 victory at Nebraska last time out on Monday night. Like Purdue, IU has posted OVERs in three consecutive outings. The Hoosiers have failed to cover in back-to-back games for the first time this season.

Purdue saw five separate players go for 11 or more points at Illinois in the OT win. Sasha Stefanovic registered 22 points with eight rebounds, including five 3-pointers, while hitting 6-of-11 from the field. The Boilermakers had four players with seven or more rebounds, including superstars Zach Edey and Jaden Ivey with eight boards apiece. Purdue his 46%, or 31-of-68, from the field while knocking down 44%, or 8-of-18 from behind the arc, while making 26 free-throw lines on 32 attempts, or 81%.

The Boilermakers have posted three straight wins with back-to-back covers. That follows up an 0-4 ATS skid from Dec. 20-Jan. 8. The last time Purdue has three covers in a row was a 5-0 ATS run from Nov. 16-30. In addition, the OVER has cashed in each of the past five after a 4-1 UNDER run from Dec. 3-20.

Indiana has struggled with Purdue in recent seasons, losing nine straight head-to-head meetings while going 2-7-1 ATS in the past 10 in the series. The UNDER has connected in five of the past seven meetings.

The Hoosiers have failed to cover the past two games for the first time this season. The last time Indiana failed to cover three or more in a row was an 0-6 ATS skid from Feb. 20-March 11 to close out the season, including a loss in the first game of the Big Ten Conference tournament. 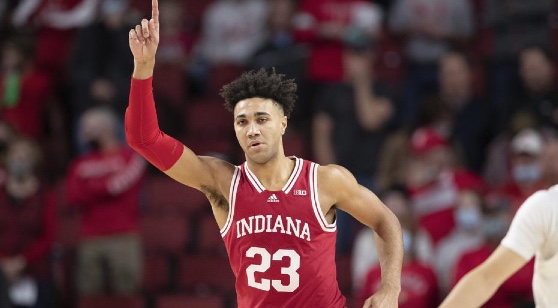 Trayce Jackson-Davis is expected to play after dealing with a minor hip injury lately. (AP)

Purdue hits the road to battle its rival, and the Boilermakers aren't likely to find much resistance. The Boilermakers have won nine consecutive meetings in this series dating back to Feb. 20, 2016, a 77-73 win in Bloomington by the Hoosiers, a game which saw the Boilers cover a 4.5-point number at most shops. The UNDER has connected in five of the past seven in this series.

The Boilermakers are flying high after a huge overtime win on the road against Illinois, its third straight victory inside the conference. That's two straight victories on the road after a stunning buzzer-beater loss at Rutgers back on Dec. 9 when Purdue held the No. 1 ranking in The Associated Press' Top 25 poll.

All four of Indiana's losses have come on the road, while going 11-0 SU at home with a 9-2 ATS mark. While that's all well and good, facing Purdue is a different animal. The Boilermakers have absolutely owned this series, and Indiana enters on a 2-3 ATS mark in its past five games overall. This won't be a blowout, but it won't be a cover for IU, either.