The Ultimate Fighting Championship hosts yet another event this weekend in the UFC Apex facility. For the second week in a row, the card is headlined by two heavyweights, with last weekend seeing Derrick Lewis get the upset over Curtis Blaydes in signature KO fashion.

This weekend, however, sees a matchup between two up-and-comers in the division, Cyril Gane and Jairzinho Rozenstruik.

Despite only having a professional resume of nine fights, Gane has already proven himself to be a worthy contender among the heavyweights.

Meanwhile, Rozenstruik is still a contender in the division after coming back from a KO loss to Ngannou to win his last fight.

Gane has yet to face defeat as a professional mixed martial artist, while Rozenstruik has only lost once.

The stakes are high in the main event, and the rest of the main card features some exciting bouts, so let’s get down to predicting the fights.

This fight is Ciryl Gane’s big test. Can he hang with the real dogs in the heavyweight division?

If he beats Rozenstruik, he’s definitely in title contention, and if not, he’s still young enough in his career to get back on the horse and fight his way back up.

Jairzinho Rozenstruik, 32, was on a tear in the heavyweight division himself not too long ago, racking up consecutive wins over names such as Alistair Overeem and Andrei Arlovski. However, after a run-in with Francis Ngannou, Jairzinho would face defeat for the first time as a professional. Just months after the Ngannou bout, Rozenstruik would get back in the win column with a second-round TKO over Junior Dos Santos. Now, he’s scheduled to face another hot contender in his division.

While Rozenstruik showed a lot of heart by coming back just months after his KO loss and beating a divisional veteran, Gane’s movement is unmatched in the UFC’s heaviest weight class. He really moves as a guy half his size.

In four UFC bouts, Gane has absorbed less than 2 strikes every minute, with a defensive striking percentage of 73%. This means that if you throw 100 strikes at him, you would only land 27, which is a bit ridiculous for a heavyweight when you think about it.

It’s not like Gane hasn’t faced any good fighters either, as we’ve seen him beat the likes of Tanner Boser and Junior Dos Santos. Both are what I’d call ‘good competition’.

Apart from this, just looking at the statistics, there’s a clear difference between how these guys have performed in the cage. I’m not kidding when I say that Gane has better numbers in every single statistical category, including both striking and grappling.

On top of that, Gane is younger and has a 3-inch reach advantage.

How much you attribute to stats is up to you, but it has to mean something that Gane is literally better in every category when you compare him to Rozenstruik, statistically.

Rozenstruik has been bested before, while Gane hasn’t even been in a compromising position. Gotta go with Gane, who either dances around Rozenstruik and kicks him to a decision, or finds a finish inside the distance. I’m mostly leaning towards the latter of those two outcomes, this being the heavyweight division after all. 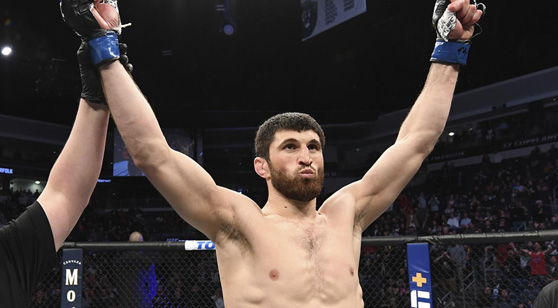 Magomed Ankalaev has won five straight UFC bouts and four of them have ended within distance. (Getty)

In the co-main event of UFC Fight Night: Gane vs. Rozenstruik, we have an exciting bout on our hands in the weight class below that of the main event. Nikita Krylov takes on Magomed Ankalaev in the Light Heavyweight division.

Despite coming off to an unlucky start, Ankalaev’s UFC career has been surging towards title contention since his literal last-second submission loss to Paul Craig, back in 2018. Since then, Magomed has amassed a 5-0 win-streak, most notably beating Ion Cutelaba twice.

Krylov is a pretty well-rounded guy, who is comfortable on the feet as well as on the ground. Personally, I always hold well-rounded fighters in high regard, despite wins and losses.

That said, I can’t help but wonder how Krylov will win this fight. In his last 5 outings, he’s landed 8 takedowns on his opponents, and while impressive, I don’t think it’s enough to beat a guy like Ankalaev.

With a takedown defense upwards of 90%, Ankalaev almost always avoids going to the ground when his opponents try to get him there.

On the feet, Ankalaev is always in the driver’s seat. We just saw him flatline Ion Cutelaba, who was regarded as one of the more dangerous strikers in the 205 lb division. It only took him one round.

Krylov is not one that often gets finished, but I can’t see him keeping up with the Russians' consistent output on the feet.

Krylov needs chain-wrestling to win this fight, which he does not have.

Ankalaev stays on the feet and outpoints Krylov to a decision.