Non-conference NBA action will resume on Easter Sunday with the Sixers set to host the Grizzlies at 7:00 p.m. (ET) in Philadelphia, Pennsylvania. So, VI is getting you ready with a variety of betting resources to help handicap all the evening’s top contests.

Philadelphia heads into Sunday’s matchup as a 1.5-point favorite over the visiting Grizzlies – marking the fourth time Memphis has been listed as an underdog across its last six games.

While the total for this contest currently sits at OU 224.5, which is the lowest over-under set for a Grizzlies’ game since Memphis matched up with Oklahoma City back on March 24th (O 219). 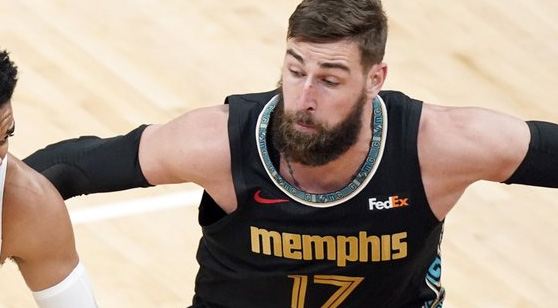 Memphis has been a sound investment for bettors recently, going 8-2 against the spread in its last 10. (AP)

The Grizzlies head into Easter Sunday coming off losses in three of their last five games – despite owning a record of 4-1 ATS across that stretch.

Memphis’ most recent affair resulted in a win over the Timberwolves though, as eight different Grizzlies players eclipsed double-digit scoring on the way to a 12-point victory Ja Morant and company. On the other hand, the Sixers enter Sunday’s contest boasting wins in 12 of their last 15 games – with Philadelphia’s only losses during that timeframe coming in matchups with the Bucks, Clippers, and Nuggets.

After sitting out 10 straight games with a knee injury, Joel Embiid finally returned to action for the Sixers during their matchup against Minnesota last night – resulting in a nine-point win for Philadelphia.

It wasn’t the big man’s best offensive performance, but Embiid’s presence in Philadelphia’s lineup undeniably makes the role players positioned around him better – demonstrated by the Sixers shooting 51% from the field and 43% from deep during Embiid’s first game back.

Philadelphia and Memphis have split their last two regular season matchups – with the Sixers’ victory coming back in February of last year, and the Grizzlies victory coming this past January.

Embiid exited Philadelphia’s lone matchup against the Grizzlies last year with a stiff neck. Luckily for the Sixers though, his services weren’t imperative for a victory – as Memphis shot just 40% from the field and 5-21 from beyond the three-point line during a double-digit win for Philadelphia.

The most recent meeting between these teams resulted in a 2-point win for Grizzlies though – as Memphis was able to capitalize against a Sixers lineup lacking Embiid and Curry on that given night.

Their record might not necessarily show it, but the Grizzlies have played some really solid basketball across its most recent stretch of games – going 5-3 SU and 7-1 ATS in their last eight matchups, with the Grizzlies only loss ATS during that timeframe coming in the second half of a back-to-back set against the Jazz.

The ‘under’ has taken a slight advantage in Grizzlies’ games so far this year, with the ‘over’ currently sitting at 22-24 clip in matchups containing Memphis this season – which includes the two low-scoring affairs spanning their latest contests.

Make note though, prior to cashing ‘under’ tickets in each of Memphis’ last two matchups, the total had gone over in five straight Grizzlies’ games.

The Sixers head into Sunday having won six of their last eight games – with Philadelphia’s only losses across that span coming in matchups they were listed as underdogs in (DEN, LAC).

Philadelphia sits atop this year’s Eastern Conference alongside Brooklyn with a record of 34-15 so far this season – trailing just the Jazz and the Suns for the top spot across the whole league.

Even with the extensive amount of success Philadelphia has experienced this year, the Sixers’ struggles on the road have still been prevalent throughout their current campaign – with Philadelphia possessing a record of 19-4 in home games, and 14-11 in away games so far this season.

According to Fanduel Sportsbook, Utah’s center, Rudy Gobert is the heavy favorite to take home this year’s annual Defensive Player of the Year award at -220 odds. Philadelphia’s Ben Simmons comes in directly behind Gobert on this year’s ballot at +210 though – with the only other player given realistic odds by most books being Indiana’s Myles Turner (+500).

Simmons has a difficult defensive task ahead of him in Ja Morant on Sunday night, but luckily for him, Morant is in the midst of a cold spell – having scored no more than 12 points in four of his last six games, and no more than 15 points in eight of his last 11. I’ll trust Simmons to keep Morant under 20 points here, in what I expect to be a relatively low scoring matchup for these teams.