The Blazers didn’t have their top player the last time they took on the Nuggets and it showed.
Denver blew out Portland, but now the favor may be returned as Nikola Jokic might miss his
third straight game. The Blazers host the Nuggets 10:00 p.m. ET Tuesday night on TNT.

Just having Lillard back in its own right will be a gigantic difference for the Blazers this time
around. They also will most likely not have to deal with Jokic. It’s also in Portland where the
Blazers have turned things around on their own. Lillard is back on track and might use this game
as a springboard to even more consistency. The Blazers backcourt is back causing opponents
fits, and Denver will have to contain Lillard and CJ McCollum. The two are putting up over 40
points combined each night – with either one having the ability to pour in points on any given
night.

Without Jokic the offense has just stalled for Denver. They come off disappointing losses where
they simply couldn’t score. It’s going to happen again for them in this case as Denver doesn’t
have the manpower to slow down a surging Lillard. Will Barton and Aaron Gordon are now
charged with keeping up with the Blazers offense – or hoping Jeff Green can stay hot. The team
is already without Michael Porter Jr. with a back injury and hasn’t played since early November.
They normally have a great matchup down low – Jokic over Nurkic, but in this case the Blazers
center should be more comfortable.

The difference is glaring right now between Lillard at the start of the season versus where he’s
recently been. That’s also been the correlation between the Blazers winning games and
struggling earlier in the year. Lillard has hit at least 20 points in seven straight games – as the
Blazers have won four straight. They are exceptionally good at home and have been able to rely
on their top two guards for most of the offense. Norman Powell has been a huge piece of
stability and is the team’s third-leading scorer.

Not many impact the game like Jokic does on a nightly basis, so missing him – even for a couple
of games – is devastating. The offense moves through the Nuggets big man, from scoring to
passing. It’s not easy for Will Barton, Gordon, and Monte Morris picking up that slack. The team
sorely misses MPJ as he’s a nightly impact player in the NBA when healthy. If Jokic misses this
game in Portland, then expect a tough climb for the Nuggets offense. The reigning MVP leads
his team in scoring, rebounding, and passing.

Nikola Jokic is basically the Nuggets offense. He’s averaging 26.4 PPG, 13.6 RPG, and 6.4 APG.
Jokic is also shooting just over 59 percent from the field. Will Barton is at 16.6 PPG off 46.4 percent shooting. He’s at just under 5 RPG. Gordon and Morris are the only other Nuggets players to average double digits in points. In limited action this year, Michael Porter Jr. – who
remains out – averaged 9.9 PPG and 6.6 RPG.

Damian Lillard leads the Blazers with 21.6 PPG off 39 percent shooting. He’s balanced his early
shooting woes by passing the ball, leading the team with 8.1 APG. McCollum slides in at 20.4
PPG and is shooting 42.5 percent. Powell is just under 1 PPG and shooting 49.7 percent from
the floor. Anfernee Simons and Jusif Nurkic are each averaging just over 11 PPG. 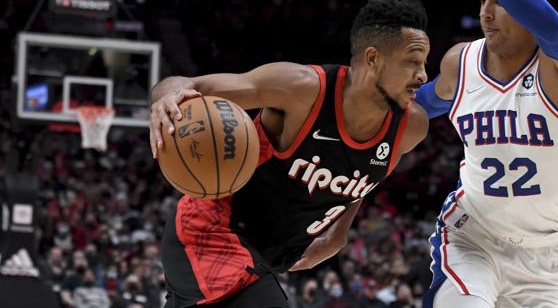 The first matchup between these two teams was on November 14 th in Denver. The Nuggets
destroyed the Blazers 124-95 – although Lillard missed that game with an abdomen injury. Jokic
stands to miss his third straight game Tuesday night.

The Blazers are 8-1 at home and are 5 th overall in league offense. Lillard is coming alive at the
right time and Jokic is most likely going to sit. Plenty still points to the Blazers continuing their
home winning streak with an easier victory. Denver is going to have to work awfully hard for
spots on the floor and even then, they lack their biggest piece and impact player.

Don’t count
on Denver to do anything in helping the total unless you are going under. Lillard is returning to
stardom as Jokic will have to take a seat. The Blazers will keep things rolling at home and win
this one in convincing fashion.