Western Conference NBA action will resume on Saturday night with the Jazz and Clippers set to square off for Game 3 at 8:30 Eastern time on ABC in the lone matchup of the evening.

After dropping Games 1 and 2 in Salt Lake City, the Clippers return to the Staples Center for Game 3 as a -4.5-point favorite over the visiting Jazz – marking the first time Utah has been listed as an underdog this postseason.

The total for Saturday’s contest sits at OU 223, which appears to be appropriately stationed around the same numbers set in the first two matchups of this series – after a combined average of 224.5 points was scored across those events. 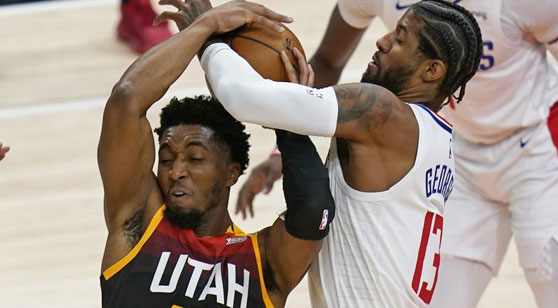 Donovan Mitchell and the Jazz head west looking for a 2-0 series lead over Paul George and the Clippers. (AP)

After dropping their postseason opener by a bucket without Donovan Mitchell on the floor, the top- seeded Jazz leisurely cruised to four straight wins over Memphis following the superstar’s return to the lineup in Game 2 – completing the gentleman’s sweep by an average of 11 points per victory in the opening round.

The Jazz didn’t skip a beat to kick off the second-round either, as they quickly jumped out to a two-game lead over L.A. to start their current series – forcing the Clippers into an uncomfortable position that probably feels a little too reminiscent for their liking, considering L.A. also trailed by two games early in the first round.

This time around though, the Clippers can find comfort in the fact their next two games will be played in Los Angeles – as opposed to hopping on a plane headed to Dallas after posting back-to-back losses against the Mavs’ last series.

Or L.A.’s return to Staples Center could administer more discomfort as it did for them in the last series, considering the Clippers went 1-3 at home and 3-0 on the road during their first-round victory over Dallas.

The Jazz won two of three regular-season matchups against the Clippers on the year – with Utah’s pair of victories both staying 'under' due to an average of just 208 points being scored across them, and L.A.’s lone victory pushing at a total of 228 points scored (116-112).

The first matchup between these teams took place on New Year’s Day and resulted in a six-point home victory for the Jazz – as Utah hung in there as long as they could during the back-and-forth battle, but Mitchell ended up shooting them out of contention with his dismal performance from the field (15 points, 6-14 FG).

The following two meetings occurred in a Monday-Wednesday doubleheader back in February though and resulted in a 1-1 split – as Kawhi Leonard and Paul George both didn’t play during Utah’s blowout victory on the front half of the set, and L.A. bounced back with a narrow victory at full-strength on the back half.

Luckily, Phoenix struggled along with them down the stretch and the Jazz managed to claim the Western Conference throne by a narrow one-game margin – earning them a five-game cakewalk against Memphis to kick off their postseason campaign.

All that being said, I’m a little nervous about backing Utah to pull off the upset in Game 3 – considering the Jazz haven’t won a game they were ‘dogs in since knocking off Milwaukee at Fiserv Forum back in early January (UTA +5.5).

The Clippers caught a break on their two-game road trip to Dallas though – as Luka Doncic told media he was experiencing a significant amount of neck pain during his team’s loss in Game 3, which appeared to continue bothering him for the rest of the series.

Kawhi has been somewhat restrained by the Jazz in his second-round matchup though, considering the superstar averaged just 22 points on 47% from the field across Games 1 and 2 in Salt Lake City.

After averaging 32 points on 61% shooting last series, Leonard has been pretty quiet on offense to begin L.A.’s second-round matchup against Utah – averaging just 22 points on 47% from the floor across the Clips’ back-to-back losses in Salt Lake City.

I’ll back The Claw to make some noise at the Staples Center in Game 3 though, as Kawhi has become known for turning into quite the showman whenever his team needs a spark – and they desperately need one here.

Despite dropping a pair of tightly contested matchups on the road in Games 1 and 2, Los Angeles returns to the Staples Center as a 4.5-point favorite over the top-seeded Jazz – marking just the seventh time Utah has been an underdog all season.

I’ll take the points with Utah here, as Kawhi’s supporting cast has been far too inconsistent throughout the playoffs to trust ahead of Saturday’s matchup, and even if the Clippers do come away with a win in Game 3 – it will probably be a nail-biter.