San Diego has taken the first two games of this series with Los Angeles, as the Padres have rebounded nicely from getting swept at home by the Brewers this past week.

The Dodgers have stumbled of late by losing four of their last five games with the only win coming by a 1-0 margin at Seattle.

Los Angeles hasn't lost three consecutive games since August 2019 as the Dodgers should get back on track tonight at home. 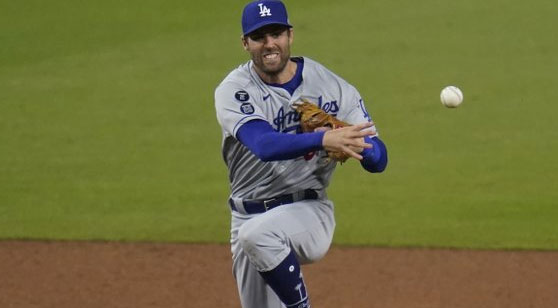 The Dodgers look to bounce back after losing the first two games of their series to the Padres at home. (AP)

The San Diego Padres are sitting in second place of the National League West behind the Los Angeles Dodgers with a record of 12-10. The Padres have posted an impressive 7-2 record away from Petco Park this season.

The Dodgers captured the first series between these division rivals last weekend in San Diego by winning two of three games. Los Angeles won the first two contests by scores of 11-6 and 2-0 before San Diego avoided the sweep with a 5-2 comeback victory in the series finale.

So far in this series at Dodger Stadium, it's been all Padres as San Diego held off Los Angeles in the opener on Thursday, 3-2, followed by a 6-1 blowout on Friday night.

The Dodgers scored a run in the first inning, but the offense did nothing the rest of the night against San Diego's Yu Darvish, who tossed seven masterful innings and struck out nine batters.

Padres' shortstop Fernando Tatis, Jr. knocked out first two home runs of the season, as San Diego hit the 'over' for the first time in seven games.

The former Cy Young winner has yet to pick up a win in four starts with the Padres, but he hasn't lost yet either. Snell has four no-decisions in four starts, as the Padres are 2-2 in these four contests.

Snell faced the Dodgers last Sunday at Petco Park and tossed five innings, while allowing two hits and two runs and striking out seven as the Padres overcame a 2-0 deficit with five unanswered runs to win, 5-2 as +115 home underdogs.

Last season's NL Cy Young winner has been burned twice by his bullpen as the Dodgers blew late leads in losses to the Athletics and Padres.

Bauer was on the wrong side of last Sunday's defeat to Snell and the Padres, but the right-hander has allowed only one earned run in his past two trips to the mound.