The Angels and Astros hook up for their series of the season as Houston and L.A. are both coming off home wins on Sunday.

This looks like a pitcher-by-committee game for the Angels tonight, who have hit the 'over' in nine consecutive series openers. 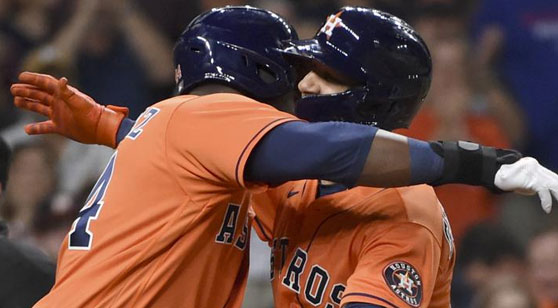 The Astros are coming off a home series win as Houston welcomes Los Angeles on Monday. (AP)

The Angels currently sit in last place of the American League West with a 15-18 record, while owning a 7-9 road mark.

The Astros have won three of their last four games since a three-game skid to improve to 18-16 on the season and move two games within Oakland for first place in the division.

The Astros have captured four of six matchups with the Angels this season, including taking three of four at Minute Maid Park in late April.

Three of those four games in Houston finishing 'over' the total, while four of six contests between these AL West rivals have gone 'over.'

Guerra gets the nod tonight, making his first start since 2018 as a member of the Brewers.

The right-hander has made 12 appearances out of the bullpen this season, as he tossed one scoreless inning in Saturday's 14-11 loss to the Dodgers.

Guerra's longest appearance of the season was 3.1 innings back on April 10 against the Blue Jays in 15-1 loss.

The right-hander is winless in four starts this season, but his offense hasn't helped much either. In Garcia's last three starts, the Astros have scored 3, 0, and 2 runs, resulting in two 'unders' and a push.

Garcia pitched well in his last appearance by striking out eight batters in 4.2 innings of a 6-3 defeat to the Yankees on May 5 as a +125 underdog.