Tampa Bay returns home from a successful road swing as the Rays face the Yankees for the third series this season.

New York looks to avenge a three-game sweep at the hands of Tampa Bay last month as the Yankees try to take advantage of the Rays' current woes at Tropicana Field. 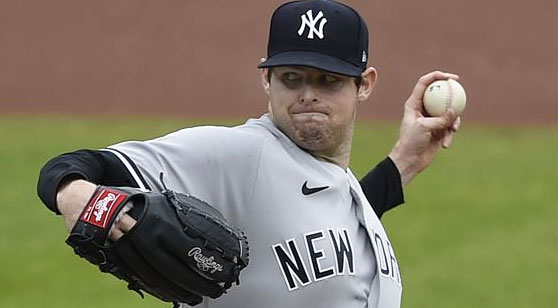 Jordan Montgomery takes the mound for the Yankees tonight as they start a crucial road set for the Rays at Tropicana Field. (AP)

The Yankees and Rays are tied for second place in the American League East, each three games behind the Red Sox for the top spot in the division.

New York leads Tampa Bay by one percentage point as the Yankees have played two less games and own an 18-16 record.

Tampa Bay has dominated New York this season by capturing five of six meetings, including pulling off a three-game sweep at Yankee Stadium in mid-April.

Four of the six matchups have finished 'over' the total, while the Yankees scored only seven runs in the last three-game set against the Rays.

The Yankees have alternated wins and losses in Montgomery's last five outings, coming off a 6-3 home victory over the Astros his last time out.

Montgomery owns a 5.58 ERA on the road, while allowing 4 ER each in two starts against Tampa Bay this season, as the Yankees have gone 1-1 in those contests.

Patino is making his second start with the Rays as he came over from the Padres in the offseason deal that sent Cy Young winner Blake Snell to San Diego.

The right-hander has struck out 10 batters and walked one in 7.2 innings of work, while striking out five in three innings of work in his previous appearance, an 8-3 win over the Angels on May 4.