Oakland has been rolling on the road this season, coming off consecutive victories at Boston to start their three-game series between division leaders.

The Red Sox offense has struggled recently by scoring four runs in the last three games, while Garrett Richards has been fade material at Fenway Park. 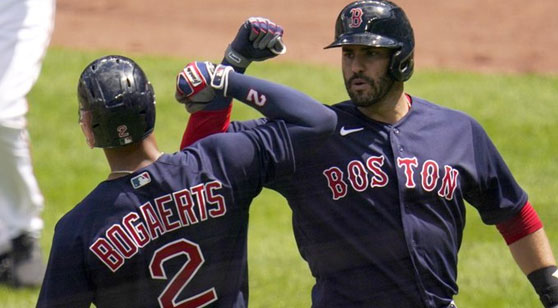 The Red Sox look to end a three-game skid against the Athletics tonight at Fenway Park. (AP)

The Red Sox remain in first place in the American League East in spite of losing three straight games. Boston owns a 22-16 record overall, while falling 10-11 at Fenway Park after losing last night.

The Athletics are also in first place in their division, leading the American League West with a 23-15 mark. Oakland has posted a terrific 10-4 road record, which is tops in all of baseball.

The A's seek the road sweep tonight against the Red Sox after capturing the first two affairs at Fenway Park.

Oakland held off Boston on Tuesday night, 3-2 as short underdogs, highlighted by a 10-strikeout effort from right-hander Chris Bassitt.

The A's won another low-scoring contest on Wednesday, 4-1, marking another 'under' between these division leaders.

Since losing his season debut against the Astros, Manaea has been solid recently with Oakland winning his last six starts.

Manaea has cashed the 'under' in both road starts this season, while compiling a 1.64 ERA away from the Oakland Coliseum.

Richards has dominated in his last two trips to the mound by striking out 17 batters and allowing two earned runs in 12 innings of work.

The former Angels' right-hander has struggled at Fenway Park this season by giving up 10 earned runs in two starts, both losses.