It's easy to blindly back the Braves tonight after they were swept at home by the Blue Jays. Atlanta is 2-4 in road series openers this season, while star outfielder Ronald Acuna, Jr. is questionable with a leg injury.

Milwaukee will try to bounce back after losing to St. Louis on Thursday, as the Brewers have won six straight at home off a home defeat. 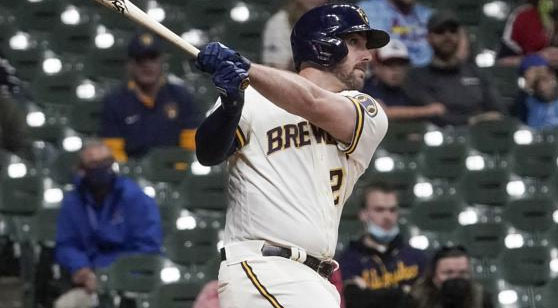 Travis Shaw and the Brewers look to bounce back tonight as they welcome in the struggling Braves to American Family Field. (AP)

The Braves hit the road after getting swept at home by the Blue Jays. In fact, Atlanta lost all six meetings with Toronto this season as the Braves sit in a tie for third place in the National League East at 17-20 with Miami.

The Brewers dropped two of three at home to the first-place Cardinals, but Milwaukee still owns a 20-18 mark on the season. The Brew Crew did slip to 9-10 at home on the season following Thursday's 2-0 defeat to St. Louis.

These teams did not meet in 2020 due to the shortened schedule, as the two squads split six games back in the 2019 campaign.

The Braves took two of three matchups in Atlanta, but Milwaukee bounced back by winning two of three at home, as four of the six games finished 'under' the total.

The Braves have lost four of five starts made by the southpaw, but he is coming off his best start of the season on May 6 against Washington.

Smyly delivered six innings of four-hit ball and allowed one unearned run in a 3-2 win over the Nationals, which also marked his first 'under' in five outings.

The Brewers are 1-2 in Houser's three home starts this season, while Milwaukee is 4-3 in his six outings in 2021.

Houser is coming off his best start of the season in a 6-2 victory at Miami as the right-hander struck out 10 batters in six innings of work.