Chicago has stumbled in the first two games at Minute Maid Park with a pair of losses to streaking Houston.

The Sox hope to turn around their luck tonight with Lance Lynn on the mound, who is winless in his past two starts.

Chicago has thrived against left-handed pitching by batting .273 this season and winning 18 of 22 games when facing a southpaw starter. 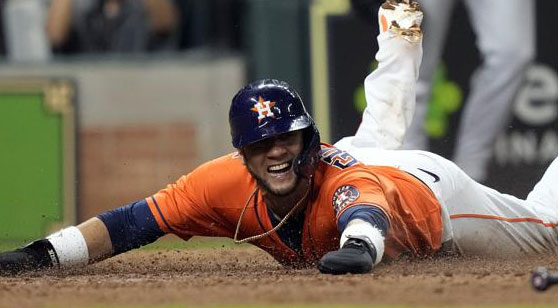 The Astros have knocked off the White Sox twice so far in their four-game series including a walk-off win on Friday. (AP)

The Astros picked up their fifth consecutive win on Friday as they edged the White Sox, 2-1. Houston improved to 41-28 on the season, but the Astros remain two games behind Oakland in the American League West.

The White Sox remain in the first place of the American League Central in spite of the defeat at 43-27. Chicago has lost each of the first two games of this series against Houston, while scoring a grand total of three runs so far.

Houston blasted Chicago in the series opener on Thursday, 10-3 behind three home runs, including the 16th long ball of the season from second baseman Jose Altuve.

The Sox tallied a first-inning run on Friday, but Chicago wouldn't score again as it lost in walk-off fashion, 2-1. Yordan Alvarez laced the walk-off RBI double in the bottom of the ninth for Houston, who has won nine of its past 11 games.

Lynn is winless in his last two starts as the right-hander is coming off a 5-2 home defeat to the Rays in which he gave up two home runs in six innings.

The fireballer is making his first road start since May 18 as his last five outings all came at home, in which the Sox posted a 3-2 record.

In three away outings this season, Lynn owns a 1.15 ERA, although the Sox are just 1-2 in those games.

The southpaw has delivered when he takes the mound this season as Valdez has allowed one earned run in each of his four starts.

In Valdez's last three trips to the hill, he has pitched at least seven innings apiece, while beating the Red Sox twice in this span.

Dating back to last season, the Astros have won eight of Valdez's last 10 starts.