Chicago lost a heartbreaker on Saturday night in the ninth inning as the Cubs look for the series split with the Dodgers tonight.

Adbert Alzolay silenced the Dodgers' bats earlier this season at home, while looking for his second road win of the season. 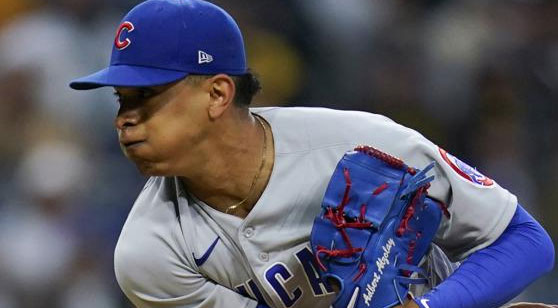 Los Angeles has compiled the second-best record in the National League at 46-31 in spite of not leading its own division, while scoring the second-most runs in baseball with 389.

The Cubs are two games behind the Milwaukee Brewers for the top spot in the National League Central at 42-35, but Chicago owns a 16-22 road record, which is tied for the worst in the NL among teams with winning records.

Chicago no-hit Los Angeles in the opener of this four-game series on Thursday, 4-0 to cash as heavy +225 underdogs, but the Cubs have dropped the last two games.

The Dodgers bounced back on Friday with a 6-2 triumph as Los Angeles snapped a 2-2 tie with four runs in the bottom of the eighth inning, but the game remained 'under' the total of 9.5.

Los Angeles walked-off past Chicago on Saturday night behind former MVP Cody Bellinger, who blasted a solo home run in the bottom of the ninth for a 3-2 triumph.

Alzolay has seen several bright spots in his first season as a mainstay in the Cubs' rotation, but has stumbled of late after losing to the Padres and Indians.

The last time Alzolay faced the Dodgers at Wrigley Field in early May, the Venezuelan-born pitcher limited Los Angeles to two runs in five innings as Chicago won in extra-innings, 6-5.

The three-time Cy Young winner has tossed at least six innings in eight consecutive starts, but the Dodgers have lost four of Kershaw's past five outings.

Kershaw has piled up the strikeouts this season with 111, which ranks tied for 12th in MLB. However, Kershaw's worst start of the season came against the Cubs at Wrigley Field on May 4 as the southpaw lasted only one inning and gave up four earned runs in a 7-1 defeat.