Milwaukee goes for the sweep of Chicago on Sunday night at home after dominating the White Sox in the first two games.

Brandon Woodruff has allowed one earned run in four of his last five starts for Milwaukee, while posting a 2.14 home ERA.

The White Sox have struggled all season on the road against teams that currently sit above .500, while already getting swept by the Yankees and Astros. 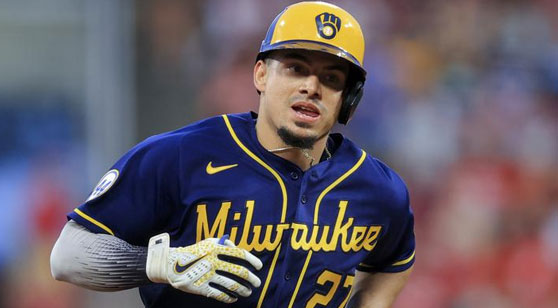 The Brewers captured the series opener against the White Sox as they wrap up their series on Sunday night. (AP)

The two teams owning the biggest leads atop their respective divisions finish up their three-game interleague series on Sunday night.

Chicago is still cruising atop the American League Central in spite of dropping the first two games at Milwaukee as the White Sox sit at 58-40 on the season, which is the fourth-best record in the AL.

Milwaukee rebounded from a perplexing home series loss to Kansas City earlier this week to beat Chicago twice, while limiting the Sox to two runs.

The Brewers are 5-2 since the All-Star break and improved to 58-41 after pulling away from the White Sox on Friday night, 7-1 with six runs in the seventh inning. Milwaukee silenced Chicago once again on Saturday night, 6-1 as the Sox fell to a staggering 0-12 this season when listed as a road 'dog of +110 or higher.

The White Sox right-hander is in the middle of the American League Cy Young race, seeking his 10th win of the season. Lynn has allowed one earned run or less in 12 starts this season, while coming off a no-decision in an extra-innings defeat to the Twins last Monday.

The Sox are 3-3 in Lynn's six road outings, while the 'over' has cashed four times away from Guaranteed Rate Field.

Woodruff is also Cy Young candidate, but will likely fall short to New York ace Jacob deGrom for the honor. The righty picked up a no-decision in a win at Cincinnati in his last outing, while the Brewers are 7-2 in Woodruff's nine home starts.

Woodruff had a five-start 'under' streak snapped in the appearance at Cincinnati last Saturday, as Milwaukee is 13-6 to the 'under' in his 19 trips to the mound in 2021.