Despite losing Games 3 and 4 by an average of 14 points, the Knicks head back to the Big Apple as a 1.5-point favorite over the visiting Hawks – marking the third time Atlanta has been listed as an underdog in this series.

The total for this event is currently stationed at OU 208, which is a number that appears to keep trending in the downward direction as this series progresses – thanks to the losing team in the first four matchups averaging just 96.7 points per game. 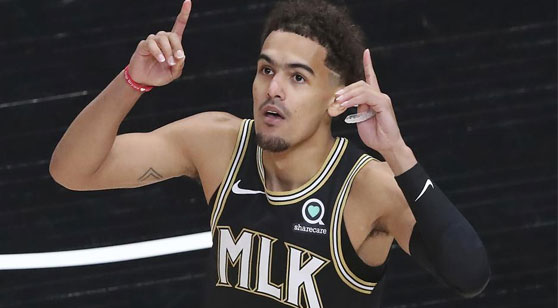 Trae Young and the Hawks look to finish off the Knicks with a road victory in Game 5 tonight. (AP)

The Knicks and Hawks were virtually locked into a playoff matchup against each other with a few weeks left in the regular season – considering New York trailed the Bucks by a healthy five-game margin for third place, and Miami never made a significant push to leapfrog the Hawks for the fifth.

The battle for homecourt-advantage ahead of this four-five matchup ended up going down to the wire though, as both teams finished with a record of 41-31 on the year – with an extra contest at home being awarded to New York in this series due to Julius Randle and company sweeping a three-game set against Atlanta during the regular season.

In Game 1 of this series, the Hawks managed to quickly steal homecourt advantage away from New York behind a game-winning floater from Trae Young with time winding down in the fourth – sealing a two-point victory for the Hawks in Madison Square Garden.

The Knicks responded with a statement-win in Game 2 at MSG though, as Derrick Rose willed his team to a two-game split to open this series by scoring roughly a quarter of New York’s points on the way to a nine-point victory during these teams’ second postseason meeting.

After splitting Games 1 and 2 of this series in New York, these teams traveled to Atlanta for the following two events – which resulted in a pair of demoralizing losses for the Knicks.

New York never really stood a chance in the Hawks’ home-postseason opener, as Atlanta held the Knicks to 96 points while posting dazzling numbers from beyond the arc – burying 16-of-27 (59%) three-point attempts on the road to an 11-point victory in Game 3.

On the other hand, Game 4 in Atlanta ended up revolving around New York’s struggles at the offensive end of the floor – as the Hawks posted relatively pedestrian shooting clips over the course of their 17-point victory (113 points, 44% FG), but New York’s 96-point effort on 44% from the field and 37% from downtown wasn’t nearly enough to compete in the event.

The Knicks swept a three-game series against Atlanta during the regular season – with all three of those contests comfortably going 'over' the total set for Wednesday’s event at an average of 233 points per game (excluding overtime).

In the first pair of matchups between the Hawks and Knicks this year, New York managed to take care of business in regulation – posting wins by an average margin of eight points in those two contests.

The Hawks gave New York a run for its money in the third matchup though – as Atlanta entered the fourth quarter of the affair boasting a seven-point lead, before getting throttled by 17 across the fourth and overtime stanzas of the contest (137-127, OT).

Atlanta’s regular-season campaign was consistently plagued by injury concerns to key rotational pieces, which resulted in quite the rollercoaster ride throughout the year.

The Hawks finally started to get healthy down the homestretch though, and it showed during their final run of regular-season affairs – as Nate McMillan’s guys went into their first-round series opener following wins in seven-of-eight games, with Atlanta’s only loss across that span coming on the second half of a back-to-back against Indiana.

Regarding the total, the Hawks finished up the regular season slightly leaning towards the low-scoring side of the spectrum, which can partly be attributed to the Hawks finishing their campaign riding a streak of four straight ‘under’ results – taking that clip from 35-33 on the year, down to 35-37 before the playoffs.

That trend appears to be building momentum as this series progresses though, considering these teams have posted an average of roughly 203 points per game across their first four postseason affairs, which bred 'under' results in three of those events.

After a back-and-forth race for homecourt advantage down the homestretch of the regular season, the Knicks and Hawks finished deadlocked at 41-31 for the fourth spot in the Eastern Conference standings – giving New York an upper-hand in the playoff bracket due to the three victories claimed over Atlanta this year.

Betting the 'under' in Hawks’ games played at one of the most profitable clips in the league during the regular season – considering the total stayed 'under' in roughly 56% of matchups containing Atlanta this year.

That low-scoring trend has remained prevalent during New York’s first-round matchup against Atlanta too – highlighted by the total staying 'under' in three-of-four contests to open this series.

Young kept his scoring streak alive in his fourth postseason outing against New York this past Sunday, as the Oklahoma product racked up 27 points on 9-of-21 from the field during Atlanta’s second straight double-digit victory over the Knicks.

I’ll back Trae to keep it going here, as Atlanta will probably lean on its primary scorer a little more than usual over the course of Wednesday’s pivotal Game 5 matchup at MSG.

The Knicks and Hawks split a pair of hard-fought contests in The Big Apple to kick off this series – setting the stage for what could potentially end up being the most exciting matchup in this year’s first round.

After getting run out of State Farm Arena by an average margin of 14 points across Games 3 and 4 though, I find it hard to believe New York is going to muster up enough magic to come back and make this a competitive series.

I’ll lay the points with the Hawks here, as the Knicks’ have been undeniably tough to take down at MSG this season – but it’s just a matter of time before Atlanta puts an end to this series.