The Los Angeles Clippers have rallied back from a 2-0 deficit to tie their series with the Dallas Mavericks.

The Clippers looked dead to rights after falling behind 11-0 early in Game 3, but they rallied to win that game and cruised to a win in Game 4 to level the series at two games apiece.

Now, the Clippers will try to do what neither team has been able to do yet in this series on Wednesday night. Win at home. 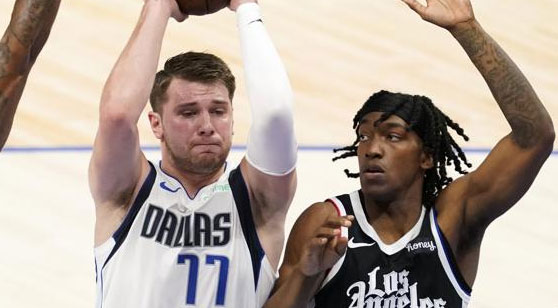 Luka Doncic and the Mavs look to bounce back from a pair of losses in Game 5 against the Clippers. (AP)

Luka Doncic was incredible in Dallas’ Game 1 win over Los Angeles. Doncic posted a triple-double with 31 points, 10 rebounds, and 11 assists. He led the Mavericks in all three of those categories.

Hardaway and Kristaps Porzingis combined for 48 points to help out Doncic, and the Clippers stayed close because Kawhi Leonard and Paul George teamed up to score 69 points. Reggie Jackson was the only other Clipper to score in double digits though.