There are a few interesting things about the prices offered for the AL East division as a -200 price tag on the Yankees does make it feel somewhat like a foregone conclusion. But as you'll see with the win totals numbers for Toronto (86.5), Tampa Bay (85.5) and Boston (80.5), I'm not sure the price gap between the Red Sox and the Rays and Blue Jays makes the most sense.

However, I've been generally higher than market on Boston the past two seasons with an awful success rate, so it's hard to decide if there is even anything to do with these prices on the basis of that thought. The AL East should be the Yankees to lose, and even with these division futures prices, it may be best to wait regardless.

Unless New York comes out of the gate stinking up the joint and one of Tampa/Toronto starts on fire, chances are the prices on Tampa/Toronto will only grow in their offerings. The Yankees are likely to always be looming at the top of the division all year long, and whomever they are chasing in those scenarios won't have too many cents shaved off these current prices should that be the case in May/June/July etc.

And if the Yankees play front runners the entire way? Any beliefs in the Rays/Jays or even Red Sox will be getting a better payback during that same part of the season.

Still don't see the Yankees losing this division as they've even shown us in recent years that even getting decimated by injuries doesn't seem to slow them down all that much, and over the course of a full season, the talent they've got from top to bottom should pay off. That thought does make it tough to get involved in division prices for the AL East though.

The Yankees are the overall favorites in the entire American League, so keep that in mind with any Yankees. The last few years we've had one World Series entrant be one of the heavier league favorites (Dodgers in their WS appearances, Houston in there as well) and the other league champion maybe coming from a little further back. The case for the Yankees is definitely there if bettors believe the NL will be the more wide open league in the end, and if the scenario where the Yankees are front runners for most of the year, the price on them won't be getting any cheaper.

Interesting to seemingly get another value on what “playoff experience” could mean with the Rays 25 cents cheaper to repeat as AL Champs over the young Toronto Blue Jays. Toronto's actually got better prices than Tampa in future markets on win totals and playoffs yes/no props, so suggesting that Toronto will figure it out enough to make the playoffs but maybe have a tougher time figuring out how to go on a run does make sense.

Still think that the same thinking applies with the Rays/Jays for the Pennant as it does for the Division, in that waiting until the middle of the year isn't going to hurt anything. Even with one of them sitting in top spot, it means there is quality chasing them elsewhere, and getting through playoff series against those teams still is incorporated.

Tough to advocate for any long shot option on the other two teams, although the Orioles are probably the best of the “worst” (teams expected to finish last in respective divisions), and a flyer on them to go from worst to first and run through the playoffs isn't the worst of the bad options out there.

Playing in front of 35% capacity is something Baltimore's had experience with for years should that be the case for MLB starting the season on time, and they play in a ballpark where if you get the timely “bloop and a blast” often, who knows how many large winning streaks a team can rattle off in a row. Most of that is out on Pipe Dream Island though. 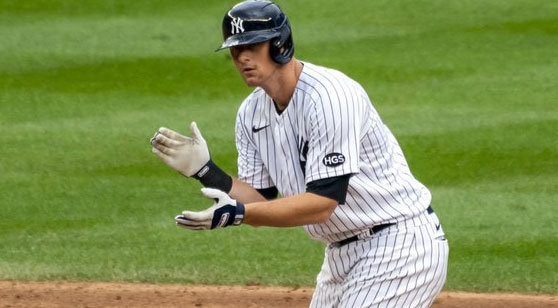 D.J. LeMahieu and the Yankees seek only their second AL East title in the last nine seasons. (AP)

Again the price flip between Toronto and Tampa can be a talking point, because if the Jays quickly figure out how to win the postseason, they are the type of team built to have streaky success like that. Relative to the pressure Tampa would face in each passing round trying to repeat.

Waiting on both still might be the best option though, as thinking Tampa is built like the Dodgers to go the route of winning a title after recently losing one is tough, and if there are multiple playoff series for Toronto this year they'll be a likely underdog in at least one of them. Round by round might be the path to take with Toronto.