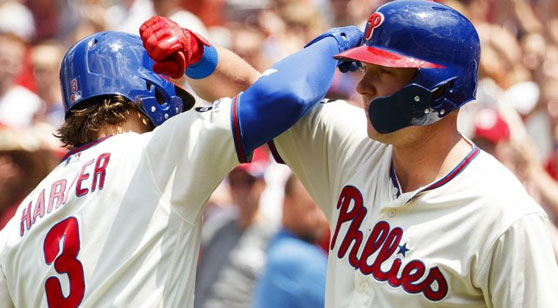 The first prop on Friday’s slate comes from an NL East division matchup, between two lineups who are very familiar with the opposing starting pitcher. Phillies ace Aaron Nola found himself on the Cy Young ballot after his 2018 campaign when he posted a 2.37 ERA and a 17-6 record. The LSU product regressed significantly last season though (common for young pitchers), finishing with an ERA of 3.87 and a 12-7 record.

Even though he showed signs of regression, Nola has consistently pitched well against the Marlins throughout his career. Last year, in 3 starts against Miami he pitched a minimum of 6.2 innings in each outing, while allowing an average of 2 runs, and 6 hits per start. In 2018, Nola allowed on average less than 1.5 runs per start against the Marlins.

On the other side of things we have Sandy Alcantara, who posted a 2-1 record against the Phillies last year, but seems to get banged around the park a bit more than the opposing Nola does. In Alcantara’s first start against the Phillies last year he gave up 6 runs on 11 hits in a game in which he was handed his first loss of the 2019 season. His following 2 starts against Philadelphia, he was able to sneak away with only allowing 1 run in each start after allowing 8 hits and 4 walks in his second start, and 8 hits and 1 walk in his third.

Back the Phillies F5 on Friday at FanDuel!

Alcantara finished last season with a 6-14 record on a 3.88 ERA. Alcantara allowed a minimum of 8 hits to the Phillies in his 3 starts last season, and I expect more of the same this time around. Philadelphia has one of the most under-rated lineups in the bigs as they get Andrew McCutchen back from injury and newly acquired Didi Gregorius.

Jean Segura is 4 for 7 off of Alcantara for his career. Bryce Harper is 6 for 12 off of him with 3 walks. The Phils see the ball well against this guy and I expect them to jump out to an early lead. I am just not personally betting on their bullpen to hold down the fort, especially after losing Seranthony Dominguez.

Jacob deGrom is just one of those pitchers that never fails to excite on Opening Day, and this year he gets the ball against another young, right-handed, division rival who has something to prove. Mike Soroka really broke out last year, posting a 13-4 record with a 2.68 ERA.

For how great Soroka was last year, the Mets gave him a little bit of trouble. He got 3 starts against the Mets last year, and he allowed 8 runs over 17.1 innings. The Mets may have saw the ball well out of Soroka’s hand last year, but I expect the young right-hander to improve upon his last season and really establish himself as a true ace in this 60-game sprint.

There is no doubt the Mets lineup is rusty, after tallying a WHOPPING 3 runs in their 2 summer camp scrimmages against the Yankees. I see this game as a great opportunity for Mike Soroka to get out on the right foot to start the 2020 season. deGrom on the other hand, is just absolutely lights out in big games, especially on Opening Day. He typically doesn’t go very deep into Opening Day games (avg. just under 6 innings per opening day start over last 3 years), but that being said he has only given up 1 run over his last 3 Opening Day starts (one of those starts against the Braves).

I’m hoping DeGrom is going to be able to escape this game with at least 5 innings of scoreless pitching. But if he does give up a run or two, there’s no way the Mets are able to add 2 more to that total with the way they have been swinging the bat in summer camp. Look for this game to be a 3-1, 4-2 game with runs coming late.

Since August of last year, Jack Flaherty may have produced the most impressive stat line out of any pitcher in the bigs. From August to the end of the regular season last year Flaherty pitched 82 innings for the Cardinals. During those 82 innings, he allowed just 7 earned runs.

Other than that one stretch towards the end of last season, Flaherty has never shown signs of clear dominance, but he gets a crack at a sub-par Pittsburgh lineup on Opening Day on Friday. I do expect some regression from him this season, but I don’t expect him to show signs of that on Friday.

I would stay away from the total runs over/under just because I am not sure what version of Jack Flaherty we are going to see during this 60-game sprint. I would bank on the Cardinals getting to Musgrove early and forcing the game to the pen, making the Cards -0.5 after 5 innings a solid bet.

Take a shot with the Redbirds F5 line at FanDuel!