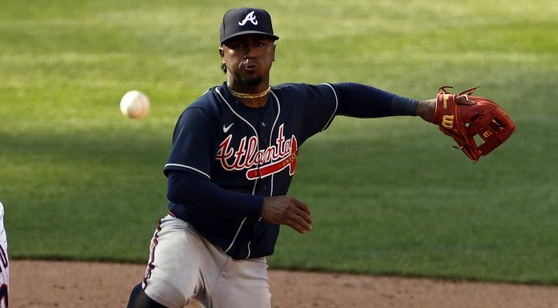 The Atlanta Braves will wrap up their three-game series against the N.Y. Mets on Sunday Night Baseball. (AP)

Two-time American League Cy Young winner, Corey Kluber will make his first start in a Texas Rangers uniform Sunday afternoon against Kyle Freeland and the Colorado Rockies. In the first two games of this opening series, there has been a whopping total of 6 runs scored combined by these 2 teams.

On Opening Day, the Rangers shutout the Rockies and were able to escape with a 1-0 victory on the arm of Lance Lynn. On Saturday afternoon the Indians were able to steal one in extra innings, 3-2, thanks to a Maikel Franco sac fly in the 10th. Corey Kluber has posted an incredible 98-58 record with a WAR of 32.2 for his career, but hit his first major road bump in 2019. The ex-Cleveland Indians ace made just 7 starts last year before fracturing his forearm against the Miami Marlins in the beginning of May. The Rockies have not seen Kluber since August of 2017 (10-3 W, CG, 3 H, 1 ER, 11 K), and that poses as an early threat to the Colorado bats, as Corey Kluber’s cutter often takes time for hitters to adjust to the first couple times they get a crack at him. I don’t expect Kluber to be in Cy Young form in his return, but I do expect him to stifle the rusty Colorado bats for at least 5 innings in his Rangers debut.

Kyle Freeland gets his first start for the Rockies this year; a guy who is looking to bounce back from a miserable 2019 campaign. In 2018, Freeland appeared to be everything the team hoped for and more, posting a record of 17-7 with and ERA of 2.85. He then followed up that breakout season with a record of 3-11 and a 6.73 ERA in 2019. I don’t believe the Kyle Freeland we saw last season was the guy we are going to see for the remainder of his career. It is very common for young pitchers to experience regression after a breakout season…His regression was just a little more extreme than most. I expect Freeland to have a good start tomorrow against a Rangers team that has tallied just 3 runs in their previous 2 games combined, helping this game stay under 5 runs for the first 5 innings, and maybe even under 5 runs for the game for the second time this weekend.

Shohei Ohtani is finally back on the mound after the highly anticipated 2-way player received Tommy John surgery after his 2018 campaign in the league. Over 10 starts in 2018, Ohtani posted a 4-2 record with a 3.31 ERA in his debut MLB season. Now he will be looking to re-establish himself on the mound after spending the 2019 season strictly being the Angel’s DH.

Oakland was victorious Opening Day after a walk-off grand slam from Matt Olson gave them a 7-3 win in the bottom of the 10th on Friday. On Saturday, the Angels were the ones who came away with the 4-1 victory behind 6 shutout innings from Dylan Bundy and the power of Justin Upton. The A’s were able to tally 6 hits during the game, but just couldn’t find a way to string good at-bats together and come up with more runs.

I think the bookmakers are over-rating Ohtani’s pitching ability in this one…and I believe they are underrating the A’s ability to swing the bat. Last year, the A’s team batting average was just below .250, with a

OPS of .776. Yes, it is exciting to have a legitimate 2-way player on a young, talented team…But holding a team to 3 runs is difficult on any given night. Ohtani could pitch a great game and walk away with a win in this one, and the A’s still go over this total. The A’s hitters are getting no respect tonight because they were only able to muster up 1 run last night. That just simply won’t happen again tonight against Ohtani. Bank on seeing a similar A’s hitting team to the one you saw on Opening Day rather than the one you saw Saturday vs Dylan Bundy in Shohei Ohtani’s return from Tommy John surgery.

This game carries a very interesting pitching matchup between starters Sean Newcomb and Rick Porcello. Newcomb’s second year in the bigs was 2018, and he spent that season as a starter. He posted a 12-9 record with a 2.90 ERA, securing him a spot in the Atlanta bullpen in 2019. After posting a 3.16 ERA over 68.1 innings pitched out of the bullpen in 2019, the Braves have decided to give him another shot at the rotation.

On the other side of things, we have 2016 American League Cy Young winner Rick Porcello taking the mound for the Mets. At this point in his career, Porcello appears to be on a pretty steep decline and is the main reason I am all over the Braves money line in this one. Since his 2016 Cy Young season, he has posted ERA’s of 4.65, 4.28, and 5.52

Jacob deGrom and Mike Soroka put on an absolute clinic Opening Day during the Mets 1-0 victory over Atlanta. Then, the Mets and Braves got their first taste of the new extra innings rules on Friday after the blown save by Edwin Diaz leading to a 5-3 victory for Atlanta. I expect the Braves to ride that energy into today and jump out on Porcello early. Look for the Mets to have a short leash on the 31-year old and turn the game over to their bullpen early, which should lead to the Braves securing an early lead and the first 5 innings money line.