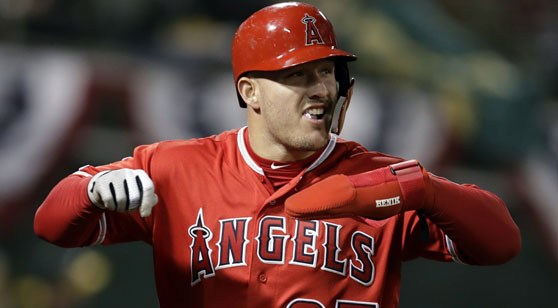 Mike Trout and the Angels battle theagainst the Athletics from Oakland on Sunday. (AP)

The opening weekend for the MLB season continues with a full slate of Sunday baseball. With four nationally televised games today, there are two bets that I really like.

For the 4PM EST game on the MLB Network I am backing Shohei Ohtani and the Los Angeles Angels against the Oakland Athletics. For the 7PM ESPN Sunday Night Baseball game I am backing the New York Mets against the Atlanta Braves.

Today’s late afternoon game between the Los Angeles Angels and the Oakland A’s is projected to be a tossup. This is most likely because the betting public views each of these teams equally. Most preseason prediction models predicted both teams to win 32-34 games this season. Additionally, both teams are 1-1 after splitting the first two games of this opening weekend series. However, the betting public is not correcting valuing the effect of DH/SP Shohei Ohtani effect on the Angels as the starting pitcher for today’s game. My model gives the Angels a 56.2% chance of winning when their -112 moneyline odds imply that they only have a 52.8% chance. That is why I am betting on the Angels to win at -112 moneyline odds.

Whether the Angels win today comes down to the impact that Ohtani has a starting pitcher. Ohtani is known as the “Japanese Babe Ruth” because he is an elite pitcher who can hit well. Many baseball commentators have speculated that he might have a higher WAR this season than Mike Trout. While Ohtani probably isn’t as good of an overall player as Trout, no one in baseball is and this is an unfair comparison. Last season Ohtani didn’t pitch, but when he pitched in his rookie season in 2018, he was unstoppable.

In ten starts in 2018, Ohtani was 4-2 with a 3.31 ERA, 3.57 FIP, and an average of 10.97 strikeouts per 9 innings. While there are questions about Ohtani’s durability because of the strenuous nature of pitching, this should not affect your strategy for betting on him in a single game. This is a shortened season and the Angels plan to pitch Ohtani on only Sundays might be feasible.

Opposing Ohtani is A’s starting pitcher Mike Fiers. Whose basic statistics are misleading. On the surface he looks like a solid pitcher because he had a 15-4 record last season with a 3.90 ERA. However, this is not the case as he had a 4.97 FIP last season and I expect him to not only regress to the mean but to decline in performance. This because as a 35-year old starting pitcher, it is unrealistic to expect him to improve on his already subpar numbers.

On days when Ohtani is a DH and not pitching, the best reason to bet on the Angels is because of their lineup which is led by Trout. As the undisputed best position player in the game right now, Trout is entering his prime as a 28-year old. While the Trout led lineup is a strength for the Angels, their lineup is inconvenienced by Anthony Rendon’s injury, and Ohtani not hitting today. The A’s lineup is a well-rounded lineup with seven out of nine position players expected to perform above-average offensively. However, while the A’s lineup is well rounded it is not good enough to beat Ohtani. That is why I am betting on the Angels moneyline at -112 odds.

Tonight’s ESPN Sunday Night Baseball game between the Braves and the Mets is expected to be a tossup. The Braves are the defending NL East division champions while the Mets had the second-best record in baseball after the all-star break last week. It may be tempting to bet on the Braves because of Mets' starting pitcher Rick Porcello. However, both starting pitchers are likely to perform just as well this year.

With both teams being nearly equal in every facet of the game, this game will come down to which team has the best bullpen. Despite blowing a 2-1 lead yesterday in the 9th inning, and losing in extra innings, The Mets have one of the best bullpens in the league. That is why I am backing the Mets moneyline at -104 odds.

The first two games of the Mets season are atypical of what I expect from the Mets this year. In the first game, the Mets won 1-0 after a shutout performance from ace Jacob deGrom and the Mets bullpen. In the second game, the Mets had a 2-1 lead that they blew in route to losing 5-3 in extra innings. However, this small sample size of games is misleading.

The first reason is that my model projects the Mets to score 5.41 runs on a typical night. One reason why the Mets offense has been unremarkable so far most likely has to do with their stadium Citi Field being a pitcher’s ballpark. However, the main reason that the small sample size of games is misleading is because my model projects the Mets to have the second-best bullpen in baseball this season.

While the Mets are a good team, the Braves are a good team as well. The Braves lineup is just as good as the Mets, and on paper their starting pitcher for tonight’s game is better. However last years statistics are misleading for analyzing tonight’s game. Despite Braves' starting pitcher Sean Newcomb having an ERA two runs lower than Porcello last season, my model projects both players to have FIPs between 4.51 and 4.55.

Besides both pitchers have virtually identical projected performances, the Mets and the Braves are relying on the Starting Pitchers for fewer innings due to the nature of the shortened 60-game season. That is why I like the Mets bullpen to carry the Mets to victory at -104 moneyline odds in tonight’s game as the increased role of their bullpen gives the Mets an edge that is too large to ignore.