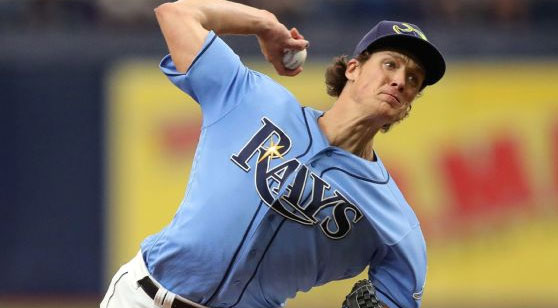 Tyler Glasnow takes the mound for the Rays tonight as he faces the Braves. (AP)

The Detroit Tigers capped off their first 3-game series with a 3-2 victory over the Reds on Sunday, thanks to a big CJ Cron homerun in the top of the 9th breaking a 1-1 tie. The Tigers may have exceeded most expert’s expectations in their first series of 2020, but their lineup struggles are still real from top to bottom.

Nobody has struck out more than the Tigers so far this season. Detroit has averaged 15.33 team strikeouts per game over their first 3 games, tallying 17 K’s in their 6-4 win on Saturday, and 16 K’s in their 3-2 win on Sunday.

The Tigers will be facing Mike Montgomery on Monday night, who is not traditionally known as a strikeout pitcher, but has seen a bump in strikeout numbers since his move from Chicago to Kansas City. In 2 starts against Detroit last season, Montgomery was able to fan 17 Tigers in just 12.2 innings.

There’s no saying what is going to happen when these two teams meet up on Monday night, but if there is one thing we know for sure about the Tigers this season, it’s that they strikeout a lot. That is why I am backing Mike Montgomery to punch out at least 4 Tigers at plus money against Detroit tonight.

Anibal Sanchez gets the ball for the Washington Nationals following their 3-2 loss to the New York Yankees on Sunday. Sanchez has been trending in the right direction for the past 2 years, posting ERA’s of 2.83 and 3.85 with winning records in each of his last 2 seasons.

On Monday he will be going up against a Toronto lineup that is in the bottom 1/3 of the league in strikeouts so far this season (9.00 per game). Teams tend to struggle with Sanchez who are unfamiliar with his stuff, while teams in the NL East tend to bang him around a bit.

Following June 15th of last year, Sanchez started 7 games for the Nationals against teams outside of the NL East, and in those games, he went over 4.5 strikeouts 5 times. We are in a point in time in Major League Baseball where hitters are not seeing the ball well out of pitcher’s hands and teams are relying on homeruns for the majority of their runs.

Tyler Glasnow really had come onto the scene strong for the Tampa Bay Rays last season, before suffering a forearm strain sidelining him from the months of May through September. The 26-year old left hander posted a 10-2 record with a 1.72 ERA on 60.2 innings pitched last season.

Glasnow came back from injury last season, not in 100% form, but still looked good. He made 4 appearances in September allowing just 2 runs on 1 hit over 12.1 innings, which was a home run to Blue Jays RF Randal Grichuk.

On the other side of things we have Mike Foltynewicz, who Is trending in the opposite direction in his career, as he had himself a very solid 2018 campaign, posting a record of 13-10 with a 2.85 ERA over 31 starts… But other than his 2018 season, he has never been able to post an ERA below a 4.30.

Foltynewicz is entering his 7th season in the MLB in 2020, and it seems like teams have him just about figured out by now, posting ERA’s of 4.5+ in 2 of his last 3 seasons. The Braves jumped all over the Mets yesterday, scoring 14 runs on 17 hits and 4 home runs.

The Braves are about to see a pitcher in Glasnow, who actually has dominating stuff, after seeing Rick Porcello the night before, who does not. I think it will take the Atlanta hitters a few innings to adjust to the 6’8” left-hander, while the Rays hitters are able to get to Foltynewicz, resulting in a Rays lead after 5 innings at -124 odds.